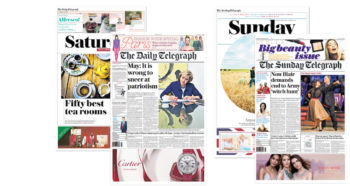 The Daily Telegraph published an unpixelated photograph of a child without parental permission, breaking UK guidelines for reporting on children. Eloise Dixon, the mother of the child, complained over the photo publication and other alleged inaccuracies in the story about her family.

“There was no specific public interest in publishing this image, particularly as an exceptional public interest justification was required in the case of a child,” the UK press regulator the Independent Press Standards Organisation ruled.

It was OK, however, for the newspaper to publish basic details about the woman’s family, like the number of children she has and how old they are, and to include photos it found from Dixon’s public social media account.

Dixon and her family made the news last year when they mistakenly drove into a slum during a vacation in Brazil, where shots were fired at their rental car. Dixon was shot.

In addition to the photo of one of her children and the ages of all her children, the Telegraph reported that Dixon was afraid to talk to the police about the incident, that her family ended up in the slum because they were looking for water, and that the armed men talked to them. But, Dixon said that their GPS gave bad directions, leading them into the slum, and the attackers never spoke to them.

Dixon has filed numerous other complaints about UK media coverage of her family, as iMediaEthics has reported, and successfully obtained corrections from the Daily Star, the Daily Express, the Daily Mirror and Birmingham Mail over similar published errors.

In its defense, the Telegraph argued the photo was fine because it was a decade old and the child looks different now. Another defense the Telegraph offered was that the child wasn’t named and that the photograph had been found on Dixon’s Facebook page.

But, the Telegraph did agree to take the photo and articles down, and offered to apologize privately, donate to charity and publish a clarification that read:

Contrary to what we reported in an 8 Aug article (“British mother shot by bandits after driving into Brazilian slum”), the Dixon family had not stopped to ask for directions or look for water when they were attacked, but had in fact been misled by their satnav. We would also like to point out that the gunmen did not speak to Mrs Dixon or her family.

However, Dixon wasn’t satisfied with that so IPSO ruled on the matter. IPSO noted that while the Telegraph argued the photo of the child was fine because it was 10 years old, the newspaper actually didn’t know that when publishing the photo, negating any possible mitigation.

Because the child’s photo was published without any justification or permission from parents, IPSO ruled against the Telegraph. The photo of Dixon was OK because it wasn’t invasive and was publicly available, though.

iMediaEthics has written to the Telegraph to ask for its response to the ruling.