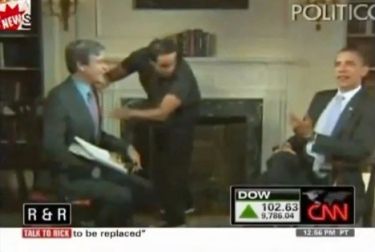 Screen shot taken from CNBC's exclusive interview with Obama where ABC News employees tweeted what the president said in the off-the-record pre-interview without CNBC's or ABC bosses' authorization.

Recently, we ran a story detailing The Poynter Institute’s response to a leaked tweet by ABC News anchor Terry Moran in which the president called Kanye West a “jackass” in a pre-interview conversation with CNBC’s John Harwood.

At the time, both Kelly McBride, a Poynter journalism professor, and Roy Peter Clark, Poynter’s vice president, said it was appropriate for the tweet to have been made public because “presidents are never off-the-record.”

iMediaEthics reached out to ABC by email to investigate further, and Jeffrey Schneider, senior vice-president of ABC News informed us that a few of their employees tweeted President Obama’s comment which was off-the-record. ABC reporters had access to the interview through the convenience of shared fiber optic line but the interview itself was granted only to CNBC.

This fact is also confirmed in a report by the Columbia Journalism Review (CJR) in which Schneider issued this statement:  “In the process of reporting on remarks by President Obama that were made during a CNBC interview, ABC News employees prematurely tweeted a portion of those remarks that turned out to be from an off-the-record portion of the interview. This was done before our editorial process had been completed. That was wrong. We apologize to the White House and CNBC and are taking steps to ensure that it will not happen again.”

In light of this new information, we reached out once again by email to Poynter Institute’s McBride to see if her position had changed from her original “presidents are never off-the-record” stance.  This is her email response to our inquiry:

“I question that it was off-the-record, because in the video Obama immediately tries to make it retroactively off-the-record after he calls Kanye a jackass… But I don’t believe the president was or should have been off-the-record at that moment… It’s important to point out that the president was speaking directly to members of the media when he made the comment. It wasn’t as if a reporter overheard what was intended to be a private conversation. President Obama had no expectation of privacy at that moment.”

During the moment President Obama uttered the jackass Kanye comment, he was preparing to be interviewed and was conversing with only one reporter, John Harwood.  Therefore, the discourse was not directed at “many members,” and so McBride got it wrong in making this assertion.  The pre-interview dialogue was information that was actually overheard by reporters who happened to be in the right place at the right time through shared cable lines, as Schneider confirmed.  So again McBride is wrong on this point.

Also it’s not really a matter of the president “expecting privacy” but rather him expecting respect from the reporters with access to him.  The issue at stake is whether the tweeting of Obama’s off-the-record comment was made public against his wishes.  Because ABC reporters sent out the tweet before receiving authorization from their bosses or CNBC, it was clearly a violation of trust between ABC and CNBC, and ABC and CNBC and the president—that’s why ABC quickly apologized afterwards.

We questioned Poynter’s Roy Peter Clark to see if he felt differently on the issue. In an email, he echoed McBride’s sentiment about a president’s right to remain off-the-record. “…if [the president] says something in private that is overheard, and that knowledge is in the public interest, I say go for it.  If the president, with all his resources, can’t exercise self-control, and be aware of his circumstances, then share it with the public… Even if this is a technical violation of the guidelines, I love the occasional rebel journalist who steps over the line in the public interest,” Clark says.

While it is true that ethics in journalism can sometimes be overlooked in light of newsworthy events that are in the public’s interest, it’s highly debatable whether a presidential comment such as “jackass” deserved so much attention that it mandated such a frenzy from reporters using various social networking platforms to publicize a comment before acquiring proper authorization.

According to the Society for Professional Journalist’s (SPJ) Code of Ethics:

Since SPJ is a nonprofit organization dedicated to the free practice of journalism and advocates for high standards of ethics in the profession, we asked them the same questions.

Casey Bukro, an ethics committee member at SPJ, responded to us via email. “I do not agree that presidents are never off-the-record… As I recall the exchange, the president, after his remark, added: ‘Give the president a break.’ I took that to mean it was a confidential comment, not one he wanted repeated,” says Bukro.  “It would be interesting to know… how many chose to give the president a break, as he requested, and how many ignored his request.” StinkyJournalism asked ABC News this question.

The response we received from ABC’s Schneider answered that “some employees” were involved in the tweeting of the unauthorized comment, and the statement he gave to the CJR states that “there were at least three ABC staffers who posted this information on Twitter. He continued “e-mails discussing how to cover the quote, and the quote itself, went circulating among ABC journalists.”  In view of the above statements from both Schneider and CJR, there were at least three journalists out there who didn’t feel it necessary to give Mr. Obama “a break.”

“The idea that journalists may act without restraint is a bit arrogant, even when dealing with a president,” Bukro points out.  “One might argue whether reporting an off-hand comment by the president, when he asked for forbearance, was in good taste or good manners,” he says.

Obama’s “jackass” remark or his words on the economy?

McBride wrote in her email to iMediaEthics,“… If the information is critical to the public’s understanding of an issue of national importance, then I think something overheard but verified is fair game.”

In an effort to bring further clarity and balance to this article, we also contacted Sandra Borden via email, journalism professor and co-director of the Center for the Study of Ethics in Society at the Western Michigan University, for her input on the issue.  Here is her response. “Despite being a public official, not everything Obama thinks or says is newsworthy, at least not in the sense of the public needing to know, as opposed to merely being interested in knowing. Was Obama’s assessment of [Kanye] West really crucial for the public to know? I don’t think so.”

In the grand scheme of things, it’s fair to say that the unauthorized tweeting of the president’s comment was a distraction from his agenda, which derailed the mission of his CNBC interview—the discussion of the regulation of financial institutions on the anniversary of the bankruptcy of the Lehman Brothers.  We brought this point to McBride’s attention and she tells us, “No, I don’t think the discussion took away from important content.”

Borden disagrees with this assessment. “… Reporting on this remark might have taken time away from reporting on the Wall Street mess, which truly is important for the public to know,” explains Borden. “Frankly, the fact that his remark was tweeted first made things worse ethically because then, on top of violating legitimate expectations, the remark was reported without any context and without any chance for the president to explain.”

McBride also wrote in her article on The Poynter Institute’s Web site that,…“a CNBC crew questioning the president fed audio and video to a pool of other journalists.”  As previously mentioned, the interview was an CNBC exclusive interview –not a pool feed–and ABC confirmed this for us.

We contacted McBride about making a correction to her article on the Poynter Web site and to date, she has not responded to our request.

Sometimes an error in judgment can be amended when one simply acknowledges the mistake and takes immediate steps to right the error.  ABC to their credit did take appropriate measures to amend the error done to both President Obama and their broadcast competitors in issuing that apology.  On the other hand, McBride and Clark at Poynter, after being made aware of the evidence, continue to ignore facts. They chose instead to believe that the president, and not the media, should “exercise self-control.”