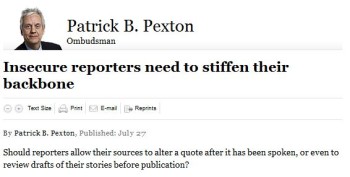 The Washington Post is banning the practice of “sharing story drafts,” Post ombudsman Patrick Pexton noted.  As we have written, the New York Times reported last month that some U.S. presidential campaign reporters are letting press offices alter or edit quotes prior to publication.

Outlets like the Associated Press and McClatchy Newspapers responded to the report by disclosing their news organizations don’t allow quote editing. Dan Rather called the practice “a jaw-dropping turn in journalism.” The Post’s Pexton weighed in on the practice, arguing that “Insecure reporters need to stiffen their backbone.”

Washington Post executive editor Marcus Brauchli emailed Poynter last month to note that  “Our current policy doesn’t prohibit a reporter from sharing a story draft with a source, but we intend to tighten it to ensure that such instances are rare without dispensation from a top editor. The practice of sharing unedited, unpublished material with sources is something we discourage” but that sometimes the Post will do it for accuracy or sensitivity.  Poynter also published a memo from Brauchli about the practice of draft-sharing and quote-approval.

Ombudsman Pexton explained that quote approval wasn’t just brought up in the Times‘ report, but also when the Texas Observer reported about a Post reporter , Daniel de Vise, who “shared two drafts of his article” with his sources and asking them for their opinion on the report, of which he wrote “everything here is negotiable.”  The Texas Observer’s July 24 story, “Reporter breaks journalistic convention by sharing entire drafts with ‘customers’ in University of Texas press office,”  reported that emails showed that the Post’s de Vise “shared at least two complete drafts of his article with UT’s press officers and allowed them to suggest critical edits, some of which ended up in the published story.”

Of this, Pexton argued:

“To give one source some extra leverage, some extra review power, weakens us as journalists. It flirts with self-censorship, and it surrenders control of this sacrosanct process of getting at the truth.”

Pexton added that “sharing story drafts also isn’t a good idea practically” because sources could try to change their portrayal, or other reasons.

Wemple added that he does “this stuff all the time, sharing either partial or whole drafts with sources.”