Reuters’ Syrian girl 'Editor's Choice' Photo mystery: Why does she have an extra thumb? - iMediaEthics

Reuters’ Syrian girl ‘Editor’s Choice’ Photo mystery: Why does she have an extra thumb? 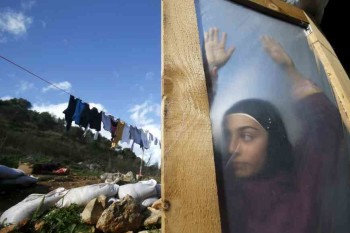 Why is there an extra thumb wrapped around the girl's right wrist? (Credit: Reuters)

Why is there an extra thumb in this Reuters photo of a Syrian girl in a refugee camp? If you look closely at the girl’s right wrist, you’ll see a mysterious thumb wrapped around it. The thumb, of course, belongs to someone else, but no other part of the other person is visible.

The caption supplied by Reuters for the photo, which was taken in January 2015, does not help explain this mystery:  “A Syrian refugee girl stands behind a door at a makeshift settlement in the village of Ketermaya, south of Beirut.”

But the Reuters photo caption only says it’s a Syrian girl standing behind a door at a refugee camp.

iMediaEthics asked Reuters about this errant thumb after reader JT Cassidy, who runs the @TimesMistaken account, informed us about the picture, which has been published by news outlets across the globe. Publications included the Canadian Broadcasting Corp, South Africa’s Mail & Guardian, the India Times, Egypt’s Ahram Online and, of course, Reuters‘ website, which listed it as an Editor’s Choice. It was also included within Reuters’ “pictures of the year” for 2015.

It was published again just this month with in a Japan Times article. 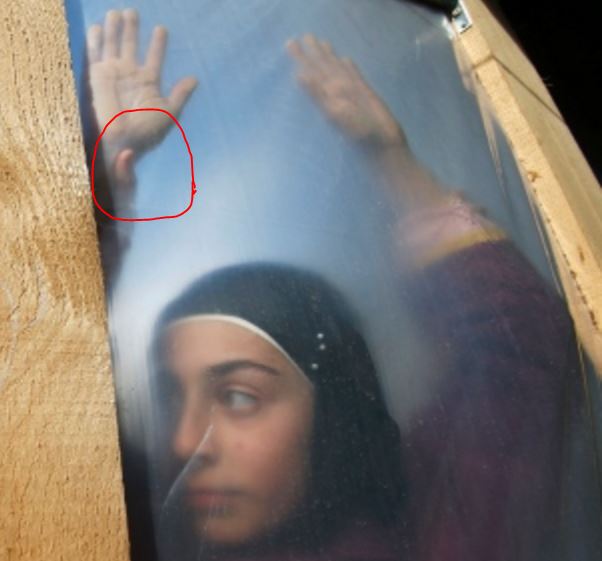 iMediaEthics circled the random thumb shown in the Reuters photo. 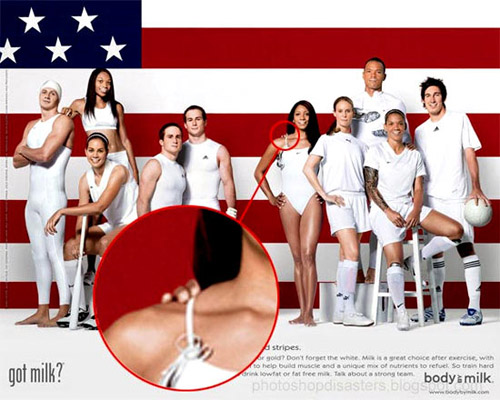 Reuters informed iMediaEthics that the photo contained two girls — not just the one mentioned in the caption and that there were no Photoshop alterations to the image.

iMediaEthics was told that the photo actually shows that the two girls were holding a door “to support the building while the father was on the roof trying to clear water from it.”

Reuters said it had another photo that showed the second girl. But, when we asked to see it in order to verify the claims, Reuters wouldn’t send that photo to us.

Reuters’ explanation for what the girls are doing doesn’t add up with what the photo shows, in iMediaEthics’ view. You see only the second girl’s thumb, begging the question, why was one girl behind another, apparently pinning the girl’s arm against an open door? Reuters would not explain how it makes sense that the two girls standing behind an open door would support the building structure.

After all, since the door is open, the girls putting pressure on the door would likely shut it and yet Reuters doubles down and says there were two girls with one completely hidden except for that extra thumb. It would make sense for the girls to be supporting the building if they were pushing behind a fixed wall, but not an open door.

Being transparent and providing this unpublished second photo would help readers understand how this is possible. But Reuters declined.

If there really were two girls in the scene, why is there no mention in the caption of that, what they were really doing or about their father reportedly on the roof?

The fullest caption iMediaEthics found to accompany the photo was posted on Reuters’ website and reads: “A Syrian refugee girl stands behind a door at a makeshift settlement in the village of Ketermaya, south of Beirut, January 8, 2015. A storm buffeted the Middle East with blizzards, rain and strong winds on Wednesday, keeping people at home across much of the region and raising concerns for Syrian refugees facing freezing temperatures in flimsy shelters. Snowfall and gales in Lebanon’s Bekaa Valley destroyed some refugee tents. REUTERS/Ali Hashisho.”

We asked Reuters if they would update the caption and run a correction to explain that two girls were in the photo and not just one as the caption now states (or would the accurate caption be one girl and a second girl’s thumb?). 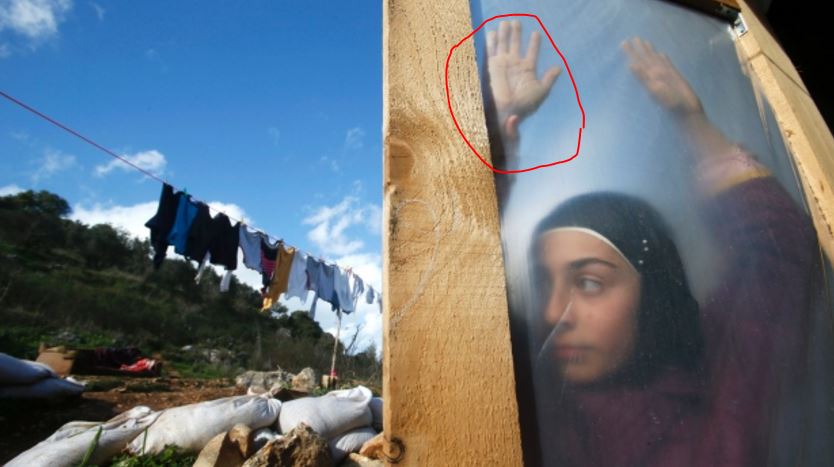 The full Reuters image with the extra thumb circled. How could Reuter’s claim be true–that the thumb is the only thing we see belonging to a “second girl” who is “largely hidden behind the wooden door frame”?

They declined to answer. See the full Reuters statement provided to iMediaEthics below.

“As photojournalists working for the world’s largest international multimedia news provider, Reuters Pictures photographers work in line with our Photographer’s Handbook and the Thomson Reuters Trust Principles, which include strict rules against manipulation or alternation of photographs. We’ve looked into the photo in question and can confirm that there are indeed two girls behind the door, holding it to support the building while the father was on the roof trying to clear water from it. The second girl is largely hidden behind the wooden door frame. Another image with the second girl more visible was captured, but it was not published.”

For funny Photoshop fails from last year, see BuzzFeed’s 2014 round-up of “33 of the Biggest Photoshop Disasters of 2014.” Photoshop Disasters also has a great collection including this one from a How I Met Your Mother ad where Alyson Hannigan (second from right) has more than 10 fingers…. 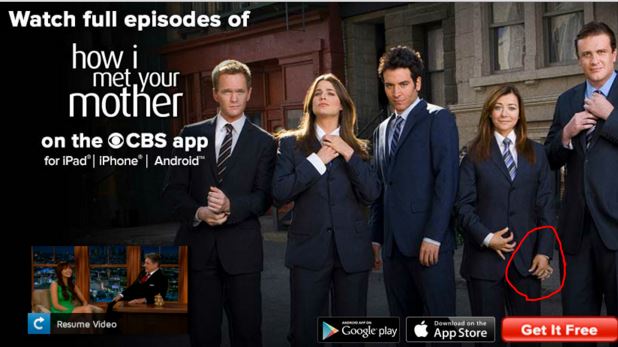 iMediaEthics circled the extra fingers on the How I Met Your Mother star’s hand. (Credit: Photoshop Disasters)

Reuters’ Syrian girl ‘Editor’s Choice’ Photo mystery: Why does she have an extra thumb?

Can COVID-19 last on glass? How many ventilators? And, the cost of direct cash payments
OK to say man 'hijacked' stage to try for a viral wedding proposal, regulator says