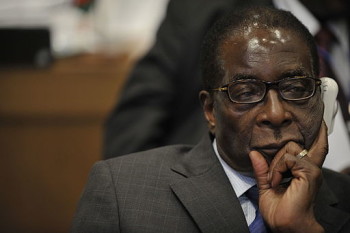 The fake quotes came from Kenya’s The Spectator, which claimed Mugabe said Zimbabweans are “honest people” but “stealing is in every Kenyan’s blood.”  The fake comments, published  by The Spectator on Nov. 3 read:

“Those people of East Africa shock me with their wizardry in stealing. Sometimes I tend to believe that stealing is in every Kenyan’s blood. These people go to their schools and read good courses but they qualify as the best thieves. You can even think that there is a subject in their universities called Bachelor of Stealing. Whenever they get an opportunity as employees, they never disappoint. They steal enough money to buy their freedom because even the judges who listen to their cases are financially powerless. I urge you my people to be on high alert in case you by bad luck, happen to visit that East African nation. They might infect you with that disease and we don’t want it here. Zimbabweans are honest people who love their country and don’t want such stealing tendencies ”

The BBC noted that no one has found evidence the comments were actually made by Mugabe.

The New York Times has now published a correction on its Nov. 4 article, “An Anticorruption Plea in Kenya: ‘Please, Just Steal a Little.‘”  The Nov. 6 correction reads:

“An earlier version of this article erroneously included remarks attributed to Robert Mugabe, the Zimbabwean president, saying that Kenyans were thieves and telling his countrymen to be on alert when visiting Kenya so as not to catch ‘that disease.’ The Spectator, a Kenyan newsmagazine that published the remarks, said this week that they had been fabricated, and were intended as satire.”

Jeffrey Gettleman, who wrote the Times story and is the New York Times East Bureau Chief, told iMediaEthics by e-mail “I had contacted a Zimbabwean journalist in Harare before we published the story” so that journalist could fact check the Spectator claims. The journalist, who Gettleman said he didn’t want to name, told him before publication the Spectator story “appeared” legitimate. “As soon as I learned the journalist’s verification efforts were not what they were supposed to be, I contacted the Zimbabwean government and the Spectator to look more deeply into this,” Gettleman wrote. “That’s when I found out the quote was fabricated and we took action as soon as my editors were able to post a correction.”

Gettleman also tweeted about the error apologizing for the mistake.

Guilty as charged. The Mugabe quote was fake. I deeply regret the way we presented it & I will update soon with a link to the amended story.

Here's the corrected story on Kenya corruption. https://t.co/JvGx0O3R79. For a deeper explanation, go to https://t.co/DW7xJ7Aq5k

Still getting nasty msgs. I corrected error, apologized and had no intention to mislead. Never made a mistake? Please let me know.

Gettleman also posted on Facebook about how the error occurred, writing “Corruption in Kenya is real but that Mugabe quote was fake.”

“I want to explain what happened,” Gettleman wrote. “A source sent me an article from the Spectator magazine that included harsh quotes from Mugabe criticizing Kenya’s corruption, which many people in Kenya and beyond say has reached an outrageous level.”

Gettleman looked into the article by contacting a Zimbabwean journalist and searching online and believed the article and quotes to be true, but found out after publication the quotes were bogus. Then he took the fact checking steps of contacting The Spectator and Zimbabwe’s government, which told him it was fake.

“The Spectator admitted to fabricating the story, saying that it was using satire to fight corruption,” he wrote. Gettleman argued his story’s point of corruption in Kenya is still important but that he has “learned from this mistake” in citing the fake quote.