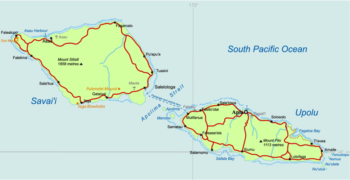 A map of Samoa (Credit: Wikipedia/CloudSurfer )

A Samoan newspaper The Sunday Samoan published a graphic photo of a woman’s dead body on its front page. The photo of Jeanine Tuivaiki, a transgender woman who died by suicide in a church,  was under the headline “Suicide in Church Hall.”

Adding to its transgressions, the Samoan used the wrong pronouns and gender when referring to Tuivaiki, who the paper said was “considered a transgender.”

The Pacific media NGO the Pacific Freedom Forum slammed the Sunday Samoan’s publication. In a statement posted on Facebook, the PFF called the Samoan’s coverage “shameful.”

“Publishing an uncensored photo of the dead woman breaches common decency, not just ethics,” PFF Chair Titi Gabi said in the Facebook statement. “That photo will have been seen on the front page by many children, and caused deep distress to her already traumatised friends and family.”

PFF co-chair Monica Miller added in the statement, “Readers are quite rightly angry and shocked at such callous treatment.”

While the Samoan used the term transgender, Miller told iMediaEthics, “I do not believe that transgender is the right term to refer to our faafafine.  There are women who dress, act  think like women…they imitate women.  They are accepted by Samoan society, but our culture.”

Miller said that “there are no guidelines or standards for suicide reporting or reporting trans gender issues” in Samoa. That said, Miller, who works as news director for Southseas Broadcasting, says her newsroom doesn’t allow graphic details of suicide.

“While this is a US territory I take the culture into consideration when I report. And western journalistic principles are also applied. With suicide my rule in our newsroom is we mention death by suicide but no details on how the suicide was carried out or even the village where it took place. The age is mentioned and the gender.”

Miller, who is Samoan, told iMediaEthics it is a “sad, sad day for journalism in Samoa” and that she personally is both “disgusted and very angry” at the paper for violating ethics with the photo of the deceased. “I blame the editor and publisher for this despicable front page story,” she wrote. Miller called for the newspaper’s journalists to sympathize with the deceased’s family and to have ethics training.

“What if this was their child?” Miller asked. “I feel that the recently established Samoa Media Council should sanction the paper.  Let’s turn the mirror we turn on others unto ourselves, the media. This also illustrates the need for editors to go through ethics training and how to make judgement calls,” she wrote.

Basic guidelines for reporting on suicide advise that news outlets avoid publishing details about how someone dies or graphic imagery of the suicide scene. Certainly, publishing a photo of the deceased crosses the line.

According to a Google cache of the online article, the newspaper called the deceased a man, used male pronouns and said the deceased was “considered a transgender…known to many as Jeanine Tuivaiki.” Comments on the article were negative.  In the paper’s Facebook share of its article, readers also criticized the newspaper.

One reader wrote in part, “Samoa Observer you have no morals, no integrity, no respect, and no compassion. Did you not think of how you would feel if this was a member of your family?”

“This is the most disgusting thing I have ever seen . I am shocked that the editor would allow the picture of this to be put up and the fact that someone took this photo of this human being and gave it to the papers . No respect for her or her family . I highly doubt the family approved this and I highly doubt the person who approved it to be printed is 100 % of sound mind . What happened to respect for our fellow man . Real disappointing and absolutely disgusting . RIP”

Journalism professor Mark Hayes told the New Zealand Herald, “Media ethics classes will study this outrage for years to come as it’s an awful example of how to absolutely not report these kinds of stories.”

The newspaper somewhat apologized to the New Zealand Herald and said it would publish an apology June 20. The newspaper’s explanation was that it was trying to show symbolism by juxtaposing it with religious stories.

“It was as if Jeanine Tuivaiki was telling Prime Minister Tuilaepa, Pope Francis, and Rev. Mauga Motu, to make friends with everyone, and let there be peace,” editor Gatoaitele Savea Sano Malifa is quoted as saying. “That was the inspiration that guided us to put that photo on the paper’s front page. It was never to demean, vilify or denigrate.”

iMediaEthics has written to the PFF for further comment and the Samoan for more information.