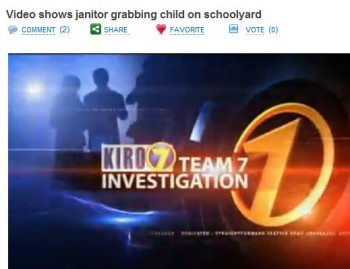 16 complaints were filed with the Washington News Council over KIRO's reporting on Chester Harris.(Credit: KIRO, screenshot)

The Washington News Council found June 16 that Seattle’s CBS affiliate KIRO-7 News and its reporter Chris Halsne wrongly accused school janitor Chester Harris with bullying and invaded the privacy of students in its May 10 and May 11 reports, according to a recent report on the News Council’s website.

The council’s president, John Hamer, told iMediaEthics that two of the council’s six formal hearings have been against KIRO’s Halsne and the council held a “virtual hearing” against Halsne last year.  Also, there have been more complaints against Halsne — three “serious inquiries” — but those complaints haven’t moved to the formal hearing process.  Hamer called Halsne a “rogue reporter” and wrote that Halsne “has been sued twice in the past for libel and lost,” pointing to The Stranger’s story, “The Court Record of KIRO TV’s Chris Halsne.”

He wrote by email:

“It makes me irate that this particular station keeps committing media malpractice. There’s simply no other term for it. They get the facts wrong, don’t vet sources, do biased stories, refuse to tell both (all) sides, and then decline to run corrections, clarifications, set the record straight and (horrors!) apologize to the victims of their unconscionably bad (stinky!) journalism.”

As we wrote last year in our interview with the Washington News Council’s Hamer,  the council is the last remaining news council in the United States, and handles the public’s complaints about the media. Before filing, complainants must agree to not sue. The council, which has been around since 1998, has held only a handful of formal hearings such as those for KIRO because the council tries to find a resolution between media outlets and the public before reaching that stage.  The council can’t force news outlets to run its reports or participate in hearings.

See here the May 10 KIRO report, “School janitor accused of bullying elementary students.” KIRO claimed that Harris “manhandled” or “bullied” students and “questioned Harris’ past history, which included several arrests but only one conviction,” the news council explained. In reality, the news council wrote that complainants said Harris “was merely trying to break up a potential fight between two boys.”

The report prompted numerous complaints about KIRO’s reporting including claims of questionable sourcing, sensationalism, errors and unauthorized undercover video recording at the school. KIRO interviewed people who had “previous conflicts with school administrators” and used sources from one family as if they were “two separate families,” the news council explained.

According to The Stranger, an alternative journalism weekly, the news council’s Hamer said this case prompted “the largest outpouring of complaints against a story — or two stories — we’ve ever received.”  Hamer told iMediaEthics by e-mail that the council “received a total of 16 formal written complaints, by far the largest number we’ve ever received in response to a particular story or stories.”

Among those contesting the report were the school’s “principal, staff, teachers, parents and International Union of Operating Engineers, Local 609, which represents custodians and other school support staff,” the news council wrote. The school, Leschi Elementary School, also sent out a May 11 letter in Harris’ defense, calling Harris an “amazing man” and “wonderful role model.” Harris was not among those who complained to the council.

People who complained were “overwhelmingly critical” and called the reporting “ethically indefensible and reprehensible,” Hamer said.

KIRO “did not get permission to film students whose faces are clearly visible in the broadcasts” and potentially put some children “at risk” because of “domestic-violence issues,” the council wrote.  Plus, the KIRO tried to hide criticism of the report, the News Council explained, because the station “deleted negative comments about the story from its website.”

The Hearings Board voted on nine issues and concluded unanimously on several of them including:

Of those who voted, the board called for a retraction, an apology, unpublishing of the original stories and a follow-up report.

The Washington News Council also included the summary of results from the 40 audience members who voted.  Those votes expressed the same position as the hearings board.

The Stranger reported that it reached out to KIRO’s reporter Chris Halsne and the station’s interim news director Jake Milstein asking for comment about the News Council ruling.  Only Milstein responded with “KIRO TV stands by its stories” — a statement the “outgoing news director” Todd Mokhtari also gave.

Hamer told iMediaEthics by e-mail that the council heard “not a word from KIRO before, during or after the hearing” but the news council “read a brief statement from their attorneys into the record at the hearing, because it was all we had.”  Hamer added that KIRO didn’t respond to his repeated inquiries.

“I personally believe that KIRO knew their stories were deeply flawed and violated every media ethics code that has ever been written in the history of journalism. So they really didn’t want to show up and have to answer tough questions in public from my experienced and insightful panel.

“All but two of my Hearings Board members in this case were journalists for at least half of their careers. They know when it’s done right — and when it’s done wrong. They would have put KIRO on the hot seat. That’s why KIRO didn’t attend, in my view. Of course, their lawyers also may have advised them not to participate because there is still the possibility of a libel/defamation lawsuit by the custodian, Chester Harris. He did not personally file a complaint with us or sign our waiver form pledging not to sue.”

Hamer noted that, as The Stranger reported, he “recused” himself from voting on the KIRO case “because I have been openly and strongly critical of KIRO and Chris Halsne in the past, so I would be perceived as biased. Not that KIRO bothered to criticize me for that; they chose to just ignore our whole process. If they had raised an objection to me, I would have been thrilled: At least we would have gotten a rise out of them!”  Hamer also recommended checking out this News Council blogpost.

“All we can do is hold them up to public accountability through our hearing process (televised statewide on TVW, which is our state’s C-SPAN) and try to get more coverage like yours. With social networking, we’re getting the word out to a broader audience, with some impact. And in this case, as you see on our website, we are also inviting the public to watch the KIRO stories and VOTE online, plus add their comments.”

Hamer told iMediaEthics that the council got “45 votes online” that  “voted almost the exact same way as the Hearings Panel and our audience.”

He also noted that the council is “trying to broaden the concept of media accountability to engage more citizens. What’s wrong with that? It’s easy for media critics to be ignored by journalists, but much harder for them to ignore a flood of public votes. We are the only news council in the world that has ever done this, as far as I know.”

We have written to KIRO TV for comment and will update with any response.