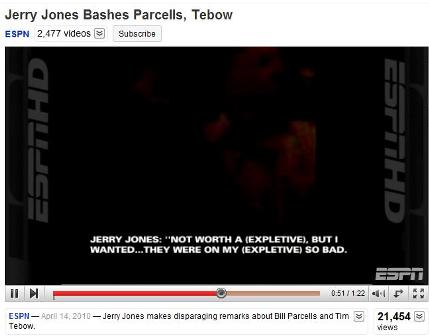 A secret recording of Jerry Jones was made in a bar. This screenshot above, from the clip posted on YouTube, illustrates how dark the barroom footage was.

A video of Dallas Cowboys’ owner Jerry Jones slamming Bill Parcells and Tim Tebow while drinking in a bar made the rounds on news sites and broadcasts this week.

The video, submitted to Deadspin, was taken on a cell phone camera and has been re-reported by about 100 outlets.

Should mainstream media have broadcast this video? It wasn’t taken by a reporter, Jones likely had no idea he was being filmed, and the conversation took place in a bar – not in a news environment and not in the context of reporting.  The bar is dark and the video is hard to make out.

“Jerry Jones did not do or say one thing wrong.  Not one.  He engaged some fans in common, sports-bar trash talk.  It’s unfortunate the fans chose to secretly tape-record Jones,” FOX Sports opines.

“Deadspin makes no secret of the fact that it has zero interest in fairness or placing its exploitive stories in any sort of proper context,” Fox Sports added.

Tim Cowlishaw wrote April 14, in The Dallas News, that he believed mainstream media owes Jones an apology.  While Jones’s comments might be of public interest, Cowlishaw argues that it’s bar gossip and that Jones never consented to have his private expressions made public.

Dallas CBS affiliate CBS11 wrote that the station didn’t run the video because it had no news value.  “My rationale was this: If I brought that video to our news director, told her it was recorded with my cell phone in a bar without Jerry’s knowledge… Well, she would have thrown me out of her office, and – I hope – fired me.”  Should more news organizations treat reader submitted footage this way? StinkyJournalism thinks so.

ESPN Senior Vice President and Director of News Vince Doria told Colin Cowherd that ESPN waited to authenticate the video before running it.  And when everyone else started covering the story without comment from Jones, ESPN considered it fair game.  While Doria told Cowherd that ESPN doesn’t “endorse that method of gathering news,” it still went ahead and reported it.  Reporting the video shows that their actions don’t match their ethical sentiments.

Jim Reeves wrote on ESPN April 14 that this instance of the Jerry Jones video is proof there are no rules in the age of social media.  News organizations are expected to report as much and as quickly as possible.  But, Reeves wonders if news organizations better stop to see if what’s reported is actually news.

Journalists are losing the trust factor with their public, according to Reeves.

He notes that before the immediacy of online reporting, reporters built relationships with those they cover.  As a beat reporter, Reeves refers to what was an unwritten code.

“Bar conversations, unless specified otherwise, were all off the record. What happened in those saloons wasn’t reported either, unless police reports were filed or there was an incident that could impact the performance of the team on the field or in the clubhouse.”

Without that code, public figures never can let their guard down outside their home. In the age of the Internet and 24/7 news cycles,  it seems like public figures can’t grab a coffee or a beer without a photo popping up online.

Cowlishaw wrote that in the past, yes, journalists used bars as “information-gathering centers.”  But, the distinction he noted was that “it was a springboard, a place to begin to get a feel for a story, not somewhere to conduct surreptitious reporting.”

Cowlishaw and Dale Hansen argued that it’s not OK to treat public figures the way Jones was treated. They’re in the public eye, yes, and maybe some should be more aware that they can always be recorded, but if this is the way public figures will be treated – secretly videotaped in a bar– then why will public figures ever want to cooperate with journalists going forward?