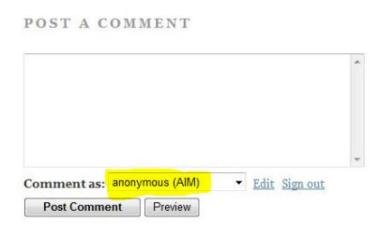 For now, anonymous comments are common on most blogs and news sites.

Publishing online has hit yet another speed bump, this one framed as a question: Should readers be required to disclose their real identities when commenting on a news site?

Wall Street Journal‘s WSJ blog reported that a back-and-forth exchange broke out across the blogosphere from among editors on Twitter.

One side, represented by Mathew Ingram, a senior writer at the technology blog GigaOm.com, doesn’t think anonymous comments are that bad.  Ingram posted on his blog, saying “I believe that one of the principles of running a media site is that you should open up interaction to as many people as possible. Not that you don’t moderate offensive comments — far from it.” Ingram blogged that he thinks moderation and engagement balance any anonymous comments.

“I believe that one of the principles of running a media site is that you should open up interaction to as many people as possible. Not that you don’t moderate offensive comments — far from it,” Ingram wrote.

Ingram also summarized the other argument, represented by The Batavian editor Howard Owens on his site.  “In a nutshell, Howard said that anonymous comments were an abomination (I’m paraphrasing somewhat) and were in fact unethical, since commenters on a news site had a ‘fundamental right’ to know the identity of the other people commenting.”

StinkyJournalism contacted Ingram and Owens, and both said that Ingram’s blog correctly characterized their main points. John Hatcher, a journalism professor at the University of Minnesota-Duluth, argued on the Poynter Institute Web site last November:

“For me, as the writer, connecting my name with what I say holds me accountable. I’ll think hard about what I write and consider whether my words are ones I want to be connected with when I walk the halls of the campus where I teach or push my cart around the grocery store where I shop.”

Since everything on the Web is so permanent, using your real name does keep one more disciplined and respectful in what one writes. When anonymous, you are not held accountable and anything goes, from name calling to personal attacks and even threats of violence.

If anonymous bloggers and commenters keep getting outed by the courts like the recent case in New York, then there will no longer be safety for those who hide behind their posted words as nameless attackers.  Model Liskula Cohen sued Google for the identification of a blogger who created a blog called “Skanks in New York” devoted to Cohen.  The media had a field day when the mystery blogger turned out to be an acquaintance of Cohen’s.

The growing number of legal cases takes the issue beyond just a debate about ethics.

For example, a case involving the identification of an anonymous commenter went to the New Hampshire Supreme Court last November. The court hasn’t issued a decision yet.

The Nashua Telegraph, a New Hampshire news site, reported that a user who wrote under the pseudonym “Brian Battersby” to comment on a mortgage-industry watchdog site called Mortgage Lender Implode-O-Mater accused the president of a company of  fraud.  The company sued to get the user’s real identity and won.

“A Rockingham County Superior Court judge ordered the publisher to reveal Battersby’s identity to the company and not to post confidential documents in the future. The Web site appealed that decision to the state’s Supreme Court, and arguments in the case took place in November. ”

The Nashua Telegraph article calls it “a case that has potentially big implications for the future of journalism in New Hampshire. It could decide if media Web sites can protect the identities of anonymous commenters. It could also determine who constitutes the media in an Internet age filled with bloggers and citizen journalists.”

The Nashua Telegraph reported that Battersby’s legal representation “contends the Implode-O-Meter Web site was pursuing journalism when it published the story and information about MSI and that the site should be protected under the state’s qualified reporter’s privilege, which protects confidential sources used by traditional media.”

As Editor & Publisher (E & P) reported, when the Wausau Daily Herald identified a commenter, its parent company, Gannett Co., took the opportunity to clarify “its policies on anonymous speech. The paper will now release information only if ordered by a court or if a comment contains a threat of imminent harm.”

Although the E & P article quoted David Ardia, the director of Citizen Media Law Project at Harvard Law School, as saying there had been a lot of anonymous comment cases, the article goes on to say that “Most of the cases fail because statements of opinion are protected under the First Amendment. Courts are requiring officials to show they have a legitimate defamation claim — that is, one involving a false assertion of fact that hurts someone’s reputation.”

E & P continued, “Most sites reserve the right to remove inappropriate comments, such as those containing obscenity and threats, and warn users their identities could be released under some circumstances, such as a court order.”

StinkyJournalism has reached out to Citizen Media Law Project and the legal representation of “Brian Battersby” for comment, and will update with any response.