Should the "Friday Document Dump" be Part of the Story?

Should the “Friday Document Dump” be Part of the Story? 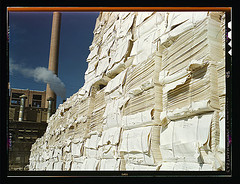 Government agencies are notorious for the "Friday Document Dump": trying to bury a story by releasing it late on a Friday. (Credit: John Vachon, The Library of Congress'photostream on Flickr, Image shows Southland Paper Mill, Texas, 1943).

How did you spend your Thanksgiving? Most likely, it was with family or friends, gathered around the table or watching football on television. Chances are you weren’t paying extremely close attention to the news. Well, if you live in Nashville, you may have missed a major story.

“Every political operative knows the best way to bury bad news that you can’t literally bury is to make it public right before a weekend or, better yet, a holiday weekend,” Nashville Scene contributor Bruce Barry writes. “It comes as no surprise that the mayor’s office chose last Wednesday afternoon to release an audit indicating that MDHA’s pre-development work on a proposed convention center was riddled with serious flaws in contracting practices.”

It’s known as the Friday document dump (though in this case it happened on a Wednesday).

WSMV-TV in Nashville posted the audit, dated November 24, 2009. Yet the report was not released to the media until late afternoon on November 25, right before the holiday weekend. None of the media outlets mentioned this time lapse in disclosing the audit to the media.

The metro government can say it was only following procedure by spending one night reviewing the audit before contacting the MDHA or releasing the information to the media. The ethical mistake comes at the hands of the local media, Barry says. “What is a surprise, of the unfortunate journalism kind, is that neither The Tennessean nor The City Paper, in reporting the story, even mentioned the suspicious timing of the release–a transparent effort by city leaders to ensure that as few people as possible notice this latest embarrassing aspect of the Music City Center story.”

After further research, as far as Stinky Journalism and Barry can tell, every Nashville media outlet failed to mention the timing of the document release. Is the media responsible for reporting not only a story, but the timing?

In an email to Stinky Journalism, Barry says yes, they are absolutely responsible.

“As for the responsibility of papers to report on an ‘entire’ story,” he says, “I’d say that a good journalist wouldn’t just smile ruefully at a shameless attempt by city officials to bury the story in holiday clutter; they would seek a response on the timing from those officials and report on the timing whether they got a useful response or not.  The timing – the transparent attempt to dim the public visibility of the story – is clearly part of the story.”

In the email, Barry also offered other instances of the Friday document dump, cases when media acknowledged that timing is part of the story:

–May 2008, McCain as [presidential] candidate releases his own medical records and his wife’s millionaire income just before Memorial Day weekend

–Oct. 2009, SEC does Friday dump of documents related to why it didn’t catch Madoff earlier

Barry is a professor of at Vanderbilt University’s Owen Graduate School of Management. Prof. Barry’s Vanderbilt biography notes that “his current research explores intersections between ethics and emotion, connections between social identity and judgments about unethical behavior; and the psychology of motivation in situations where individuals pursue very long-term goals, spanning not just years, but decades.”

Should the “Friday Document Dump” be Part of the Story?