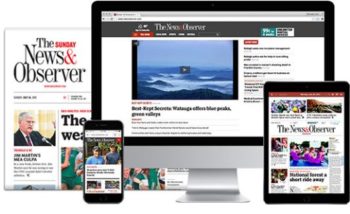 The Raleigh News & Observer newspaper is fighting a libel lawsuit over its 2010 investigative reporting that included claims that a firearms analyst may have faked evidence.

The analyst in question, State Bureau of Investigation agent Beth Desmond, is suing the newspaper.

“Desmond’s libel suit focuses on six statements the N&O published about Desmond’s work as an SBI firearms analyst, including a statement that independent firearms experts suspected that Desmond falsified evidence to help prosecutors win convictions,” the News & Observer reported in an article about the lawsuit.

The News & Observer stands by its reporting as accurate and “without an agenda, without any ill feeling toward Beth Desmond, without any ill feeling toward anyone.” The newspaper’s editor John Drescher told iMediaEthics by e-mail last week, “I will testify in court soon. I won’t have any public comment beyond what I say in court.” Drescher testified yesterday, the News & Observer reported.

One firearms expert Liam Hendrikse testified “that he had been misquoted,” the News & Observer reported, noting that Hendrikse didn’t claim that in an e-mail he sent to the reporter after publication (which did flag “a few minor errors”).