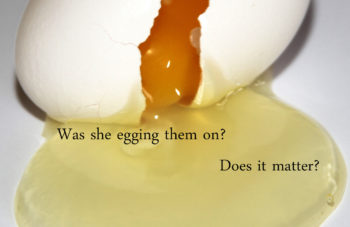 Tuscon NBC-afiliate KVOA apologized for sports anchor Paul Cicala’s tweet about the egging of a Donald Trump supporter. His tweets seemingly blamed the victim, a Trump supporter, for “taunting protesters.”

The woman was wearing a Trump shirt and was egged at a Trump rally in California June 2.

Cicala had tweeted to an NBC reporter covering the protests: “You aren’t reporting that she was taunting protesters moments before -ointing [sic] to her Trump shirt etc Please be fair.”

He added, “Those protesters are definitely wrong. But she has to be careful egging them on or she sets herself up for that.”

The station issued a June 3 statement distancing itself from Cicala’s tweet and apologizing.

“Mr. Cicala’s Tweet suggested that other news organizations were not reporting that the female Trump supporter had ‘taunted’ protesters and had ‘pointed’ to her shirt prior to the assault from the anti-Trump protesters and that because of that the incident had not been fairly reported,” the station said in part. “Mr. Cicala’s Tweet does not reflect the opinions of KVOA. It does not reflect KVOA’s core values, integrity and respect for the First Amendment. No one, of course, should be subjected to physical violence when expressing their support for a particular candidate.”

The station and Cicala apologized “not only to the victim, but also to our viewers and the community at large” and KVOA said it has discussed the matter with Cicala.

Cicala issued his own statement on the KVOA website apologizing. He said:

“The Tweet I made was about a Trump supporter who was attacked on Thursday night outside a Trump rally in San Jose, California.

“My Tweet was wrong and I take full responsibility for it.  While it was not meant to offend, I now realize just how irritated some people were by my Tweet.

“I am embarrassed to have put myself in this situation and to have let those down who I respect so much.  I pledge to do a much better job in the future.”

iMediaEthics has written to KVOA and Cicala for more information.

KVOA is an NBC-affiliate, not an NBA-affiliate.