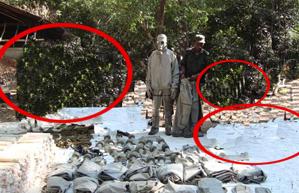 The Photoshop technique of repeatedly copying and pasting an element in a image is sorely evident in this Sri Lankan government photograph.

Siber News, a blog dedicated to “providing reliable and accurate information on issues concerning the Tamil people” uncovered what appears to be an oh-so-obvious case of fauxography and propaganda perpetrated by the Sri Lankan government.

The altered photo first appeared on the Ministry of Defence Web site next to an article proclaiming Sri Lankan soldiers thwarted a chemical attack by LTTE terrorists.

The picture shows Sri Lankan soldiers standing among a stockpile of equipment necessary to undertake terrorism against their army, reportedly uncovered in a camp in Udayarkattukulam North as part of a LTTE plot for a “mass scale chemical attack.”  This equipment was said to include 15 chemical resistant costumes and 17 gas masks but no chemicals.

After Siber News’ detailed analysis exposed the sloppy Photoshop job March 12 , their commenters revealed that the photo was taken down from the Ministry’s site that same day. It was later re-posted with the caption “The background of the image has been altered due to security concerns, to prevent enemy identification of the location.”

If the enemy was responsible for the stockpile wouldn’t they already know the location?  Also, if security concerns were so high, it’s most likely the photos wouldn’t have been published at all.

Siber News commenters speculate that the government was in an awkward spot after the photograph ran its course in the mainstream media and was compelled to make it look intentional afterward to save face.

The area is currently in political upheaval with some Sri Lankans decrying the actions of the government as genocide and intimidation and murder of the media in that region. The government claims it is fighting a war on internal terrorism.  In either case, if Siber News’ allegations are true, the Sri Lankan government crosses the ethical line with deceptive photography.