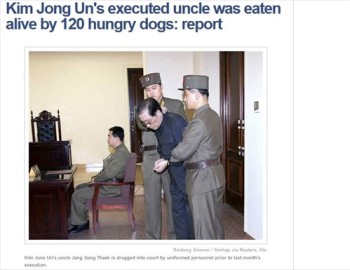 Hoaxes are hounding the media of late. The New York Daily News and others were outright duped while others like NBC News gave credence without fact checking to the dubious claim that Kim Jong un’s uncle Jang Song Thaek was fed to 120 starving dogs.

He was executed, but he apparently wasn’t fed to dogs, despite numerous international media reports.

The dog tale started as a satire joke that was then spread throughout the media. It was first reported, according to National Public Radio, “in a satirical post on Tencent Weibo, a Chinese microblogging site.’

“According to the report, unlike previous executions of political prisoners which were carried out by firing squads with machine guns, Jang was stripped naked and thrown into a cage, along with his five closest aides. Then 120 hounds, starved for three days, were allowed to prey on them until they were completely eaten up. This is called ‘quan jue’, or execution by dogs.”

But, Wen Wei Po‘s report didn’t have any sourcing and, as a whole, the tabloid doesn’t have a track record for good reporting, the Washington Post‘s Max Fisher noted. Fisher outlined several reasons why the story is not legitimate. For starters,

“With a couple of high-quality exceptions, Hong Kong media have a reputation for sensationalist and tabloidy stories that do not always turn out to be true. But, even by Hong Kong standards, Wen Wei Po is considered an unusually unreliable outlet. A recent study found that, out of Hong Kong’s 21 newspapers, Wen Wei Po ranks 19th for credibility.”

Further, the Washington Post noted that no other Chinese or South Korean media have reported on the claims, making the story less believable. “South Korea’s many news outlets, big and small, seem to be treating this story as so implausible it’s not even worth mentioning. And they would know,” Fisher wrote, adding that the story didn’t get any verification or real play until weeks after it started.

NPR listed “three other reasons to be skeptical” :

iMediaEthics has written to the Straits Times reporter asking for comment and will update with any response.

Who reported on the Dog Hoax?

NBC News reported on its website about the story, but added distancing language and, in a good move, noted that it was unable to get independent confirmation. NBC News wrote:

“North Korean leader Kim Jong Un’s powerful uncle was stripped naked, thrown into a cage, and eaten alive by a pack of ravenous dogs, according to a newspaper with close ties to China’s ruling Communist Party.”

NBC News also disclosed what it was able to verify – nothing: “U.S. officials told NBC News on Friday that they could not confirm the reports. ‘This is not ringing any bells here,’ said one senior official.”

The Washington Times unpublished its report.

A Google search indicates the Washington Times published a Jan. 3 report, “Kim Jong-un fed uncle to pack of starving dogs: report,” but the link goes to an error page.

USA Today also reported on the story, but noted the claims were “unconfirmed.”

Businss Insider Australia published a Jan. 3 report about the claims. Its story, “Kim Jong-Un May Have Killed His Uncle With A Pack Of Hungry Dogs,” said:

“North Korean leader Kim Jong-un fed his powerful uncle to 120 hungry dogs, according to a detailed report in a newspaper with close ties to China’s ruling Communist Party and reported by the Straits Times.”

Likewise, Yahoo Australia published a report about the claims without distancing or noting that it was unconfirmed.

Canada’s Sun News Network also reported on the dog claims, and despite noting the story had “scant evidence,” interviewed two “Canadian experts” who said it could be real.

University of British Columbia professor Don Baker, who “studies the cultural and religious history of Korea,” said “it’s not out of the realm of possibility.” Likewise, Rhoda Howard-Hassmann, the Canada Research Chair in International Human Rights at Wilfrid Laurier University in Ontario, said she “wouldn’t rule it out.”

The New York Daily News reported Jan. 3 on the story, but later rowed back its reporting. Its original Jan. 3 story was titled: “Release the hounds! Kim Jong Un executed uncle by feeding him to pack of starving dogs”  It went on:

“Jang Song Thaek was stripped naked, thrown in a cage and mauled by 120 hunting dogs that had been starved for five days, according to a report in a Hong Kong newspaper. Kim Jong Un and 300 officials reportedly watched the gruesome hour-long horror show.”

The Daily News report listed as its source the Straits Times, which it noted was reporting based on a Hong Kong publication. The Daily News did note at the end of the report the possibility the story was bogus, writing “There was no way to confirm the horrific details of the supervillain-style execution.”

That story was published in print on Jan. 4 with the headline, “Eaten Alive! Kim Jong Un used 120 dogs to kill kin: report.”

iMediaEthics scanned in the Jan. 4 print edition of the Daily News.

There was no distancing language except the line “It was impossible to confirm the horrific details of the report given the intense secrecy of the country’s ruling party.”

The Jan. 6 follow-up story was titled, “Report of Kim Jong Un’s uncle being eaten alive by dogs false: reports.” It went on to report that “English media” reported on the story, but didn’t admit that it was also hoaxed. It stated:

“The startling story of North Korean dictator Kim Jong Un having his uncle devoured by a pack of wild dogs has turned out to be false, according to reports.

“The account of the country’s second-in-command Jang Song Thaek, 67, being stripped naked, thrown into a cage and eaten alive by 120 ravenous hounds, circulated throughout major American media last week.

“The English media jumped on the story after Chinese outlet Wen Wei Po detailed that Un, along with 300 others, watched the sickening spectacle unfold.”

The New York Daily News added that “experts told the Daily News” that the tale “was perfectly plausible given the country’s horrific history of flouting all basic human rights guidelines.”  The only expert cited in the Daily News report is Suzanne Scholte, chairwoman of the North Korean Freedom Coalition

That organization lists its goals on its website, among which are to “close down political prison camps in North Korea” and “bring freedom, human rights, and dignity to the North Korean people.”