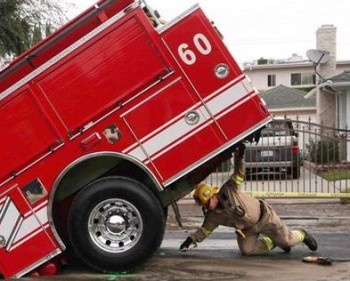 Did a firefighter act like a super hero and lift a fire truck with one hand? Apparently, a caption writer for NBC News thinks so.

Here is the larger screen shot view of the AP photo on NBC News’ website. The bad caption claim –that the firefighter is holding up the truck–is to the right of the image. (Credit: NBC News, screenshot, highlight added)

But, the Associated Press, which released the photo, carried an accurate photo caption reading:

That caption was used by the New Haven Register in its March 2, 2013 slideshow on “Sinkholes around the world – the last 20 years.”

iMediaEthics asked NBC News to correct its caption. NBC News’ Meghan Piana told us this afternoon that the caption would be updated “to accurately reflect the photo.”  As of 2:30 PM ET, the caption has been fixed (without disclosure) to read that the fireman now “looks under” the truck.