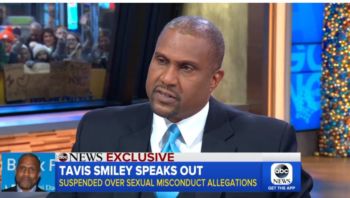 Tavis Smiley slammed PBS, which suspended him indefinitely Dec. 13 over allegations of sexual misconduct.  “PBS made a huge mistake here, they need to fix this,” Smiley said today on ABC’s Good Morning America. “They need to correct it.” When asked if he would return to PBS, Smiley said, “I don’t know.”

In Smiley’s interview with Good Morning America, he claimed PBS didn’t let him know he was under investigation or that any complaints had been made about him. Instead, Smiley said he heard about it from “former staffers” and that PBS only talked to him after he threatened a lawsuit. Even then, Smiley said he wasn’t presented with specific allegations and PBS didn’t talk to his human resources person or any current staff. iMediaEthics has written to PBS to ask about these claims.

PBS issued a statement Dec. 14 saying it began investigating Smiley after “receipt of a complaint” and found “a pattern of multiple relationships with subordinates over many years, and other conduct inconsistent with the values and standards of PBS.”

“I have never groped, I have never coerced, I have never exposed myself inappropriately to anyone in over 30 years, over 6 different networks, there has never been any allegation of that,” Smiley said, adding a call for a “sense of nuance and proportionality in this conversation.”

Further, Smiley noted that he owns his company, with an employee handbook that doesn’t “encourage” or “forbid” employee relationships, and that PBS only distributes his show.  Smiley said he “never gave any favoritism upward or downward, I never promoted anybody, demoted anybody,” and that his company still employs one woman with whom he had a relationship.