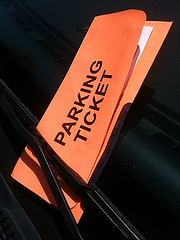 A Tennessee judge claims that a TV news reporter defamed him in retaliation for the judge's refusal to dismiss one of the reporter's parking tickets. (Credit: Flickr, "alicegop")

The judge, Daniel B. Eisenstein, claims that Williams defamed him in retaliation after Eisenstein looked into a police captain’s call to dismiss Williams’ parking tickets, according to Courthouse News. Williams has reported two investigative stories about Eisenstein, which Eisenstein called “false and malicious.”

In one July 2010 report, Williams reportedly questioned if Eisenstein would face an ethics investigation, a claim Eisenstein denies.  Eisenstein claims that Williams’ report had “no source or legitimate factual basis,” and that “Williams or someone on his crew” tried to get a Tennessee court to investigate him.

In February 2011, a report by Williams questioned a mental health court and foundation that Eisenstein “developed and organized.”  Williams’ report was titled “Judge Uses Unlicensed Psychologist for Mentally Ill.”

Reporters Committee for Freedom of the Press added that the mental heath story questioned if Eisenstein “hired an unlicensed psychologist [Jim Casey] to treat patients.”  While Williams reported an “interview with a program participant” who claimed Casey treated her, Eisenstein’s lawsuit claims Casey worked in a “support and guidance” role but didn’t treat patients.  RCFP reported that government records indicate “the information Williams used in his story was inaccurate, according to Eisenstein’s complaint.”

Eisenstein’s lawsuit also noted that in part of that program, Williams claimed “the judge had nothing to say,” when Eisenstein’s attorney reportedly “sent a number of letters to the news station’s attorney to explain the discrepancy regarding the federal records and to answer Williams’ questions,” according to RCFP. StinkyJournalism notes that the online version of the story features a link to Eisenstein’s attorney’s letters here.

Eisenstein alleges that Williams intends to report more stories about him and that he’s unsuccessfully requested apologies from both the TV station and Williams.

In response to Eisenstein’s lawsuit, The Tennessean reported that News Channel 5’s attorney, Ronald Harris, stated: “We do dispute the allegations that have been made.  News Channel 5 is not aware of anything that’s false or inaccurate in the news stories.”

According to Courthouse News Service, in 2010, Williams “allegedly had parked in a media parking zone/loading zone in a car not identified as a media vehicle, and got two tickets for illegal parking.”  A police captain sent Eisenstein, the judge, a request to dismiss one of those two tickets.

But, in the years prior, Tennessee judges had been criticized and advised on the practice of dismissing tickets outside of “proper procedure,” Courthouse News reported.  In 2009, Nashville’s mayor told “metro employees not to give preferential treatment to anyone by dismissing traffic citations without proper procedure.”  And, Williams himself, reported in 2006 a series on preferential treatment and ticket dismissing, Courthouse News noted.

In a 2006 report, Williams alleged Eisenstein is one of the judges who dismisses tickets outside of “proper procedure.”  According to the report, Eisenstein is implicated as a judge dismissing tickets upon request.  Eisenstein is quoted as saying “someone in the police department — an officer — asked me to withdraw” the tickets in question.  “They are misusing me as a judge. And if you find out who is doing it, I would be delighted to know. Right now, I am furious about it.”

Eisenstein claims that Williams viewed the investigation and hearing into the police captain’s call to dismiss tickets as “an effort to embarrass him rather than an effort to pursue some legitimate objective.”

According to a 2010 report by Nashville City Paper,  Eisenstein at the time stated that “I was being asked to do exactly what I had been accused of doing, which I hadn’t done” with regards to dismissing traffic tickets.  A police spokesperson, Don Aaron, reportedly told City Paper that “Williams did not ask” for the ticket to be dismissed.

Police Captain, Rita Baker, stated that issuing two tickets was improper procedure and that “If I was doing something special for Phil Williams, your honor, I would have asked that both tickets be dismissed.”

iMediaEthics has written to both the news station and Eisenstein for comment and will update with any response.

UPDATE: 07/05/2011 3:03 PM EST: WTVF’s news director, Sandy Boonstra, responded to iMediaEthics’ e-mail inquiry. Boonstra stated that “At this time we do not have any further comments. Other than we take this very seriously and stand by our stories.”