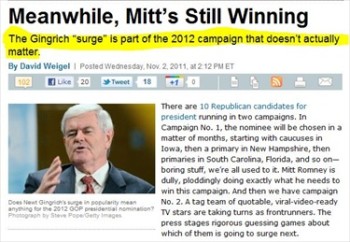 Since last April, I’ve written several stories that suggest it’s premature to talk about Donald Trump, Michele Bachmann and, most recently, Herman Cain as frontrunners in the 2012 GOP presidential nomination contest. (Rick Perry was a quick shooting star, who flamed out before I could get around to warning about his frontrunner status.)

David Weigel writing for Slate has an interesting slant on media coverage of the GOP nomination race: Essentially, he writes, there are two contests – Contest #1, with Mitt Romney the clear frontrunner and almost certain victor; and Contest #2, with “a tag team of quotable, viral-video-ready TV stars…taking turns as frontrunners.” The latest soon-to-be frontrunner in Contest #2: Newt Gingrich! (Let me quickly add: Beware of this projection as well!)

Why are there two contests? According to Weigel, campaign reporters, who should know better, like the faux polls that are the fodder of the second contest, which point to candidate surges and flame-outs — because the results are “suspenseful and entertaining!” Contest #1, while more realistic, is “boring.”

But does anyone seriously believe that the polls of Republicans across the country can predict what the Republicans in the early state contests in Iowa, New Hampshire, South Carolina and Florida will do? Yet, it’s in those states where the candidates will get their momentum.

And even in those states, most voters don’t know which candidates they will support. Less than a third of voters in each state have committed to a favorite. In Iowa, it’s less than a quarter of the potential voters.

So, identifying a frontrunner only by looking at the polls – whether the national polls, or even the polls in the early states – is at best a wild guess.

Why is Romney the frontrunner? Not so much because of the polls, but because of his visibility, the quality of his campaign, the large amounts of money he has raised, his performance in the debates, and his credibility among establishment GOP leaders.

Not all of those indicators are easily quantifiable, but together they provide a qualitative judgment that has some heft to it.

These indicators don’t mean Romney will win regardless. But they show a candidate with the potential for a solid and enduring campaign.

The other “frontrunners” who have ebbed and flowed are missing most of these positive indicators. The poll numbers by themselves are slippery and volatile.