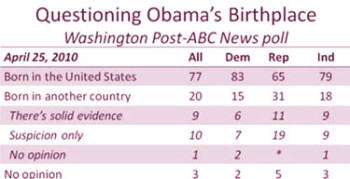 Now that President Obama has released the long form of his birth certificate from Hawaii, you might think that the birther movement, the large numbers of Americans who believed that Obama was born outside the United States might decline.

But that thinking assumes that large numbers of Americans actually believed that Obama was born outside the country in the first place. And we knew that…how? Because our pollsters told us so.

Or, at least some of them did.

Among them is the New York Times/CBS poll, conducted April 15-20, 2011 – showing almost half (45%) of all Republicans believing Obama was born in another country and another 22% who weren’t sure – a total of two thirds of all Republicans seemingly unsure if Obama was a legitimately elected president.

Among all Americans, according to the same poll, fully a quarter of the people say Obama was not born in the U.S., and another 18% are unsure – leaving only a little over half (57%) saying Obama is definitely a legitimately elected president.

These results are about the same as what CBS reported a year earlier, April 5-15, 2010, suggesting that Donald Trump’s faux political campaign – based primarily on attacking Obama’s birth and academic credentials – has had little effect on the public at large.

Polls Responses – A Message About Obama, or Sincere Beliefs?

The numbers of apparently doubtful Americans seem so outrageously high that one can’t help suspect poll respondents are playing mind games with the pollsters. Did all those people really believe Obama was not born in the U.S., or were they just saying they didn’t like Obama?

Actually, the latter, as it turns out – many people using the question to express their negative feelings about the president, while lying to the pollsters. It’s not the first time we pollsters have been fooled into believing that people mean what they say.

How can we be so sure? A comparison of different poll questions finds that the questions themselves can trigger partisan responses.

The Questions on Birth Location

The CBS/NYT question is a poster child for waving a red flag in front of Obama critics:

This question invites partisan opponents to choose a critical response. It mentions that “some people say Barack Obama was NOT born in the United States,” but it doesn’t add that a whole lot of people think he was. It’s a classic case of a biased question, leading the witness toward a specific point of view.

Contrast that poll question with the objective formulation provided by the ABC/Washington Post poll:

“On another subject, where was Barack Obama born, as far as you know?”

This question is a model of objectivity, not giving any information to the respondents and asking for their opinion (in their own words), while also suggesting that a “don’t know” response is a valid answer.

One other comparison is worth mentioning: The Fox News poll, conducted April 3-5, 2011, doesn’t explicitly raise the issue of the Constitutional requirement for a president to have been born in the U.S., but it does ask up front whether Obama was born in the U.S. or not – which can trigger the partisan response for many poll participants.

“Do you think Barack Obama was born in the United States, or not?”

A comparison of  the results is instructive:

Among just Republicans, the contrast among the polls is even greater: while CBS shows only a third of Republicans believe Obama was born in the U.S., the ABC/WP poll shows twice that number.

It seems clear that presenting the question to respondents as an issue of legitimacy (as did the CBS/NYTpoll) stimulates Republicans, much more than Americans overall, to a partisan response.

Unlike the other two polling organizations, the ABC/WP poll followed up the basic question with several more, in an effort to understand some of the figures.

Among those with no opinion, the poll asked “Is it your best guess that Obama was born in the United States, or in another country?” (The two  options were rotated to minimize response order effects.)

This question showed that the 19% “no opinion” respondents were more inclined to say the president was born in the U.S. (9%) than say in another country (6%), with the rest still expressing no opinion.

Finally, the poll asked the people who said “another country” (the original 14% plus the 6% whose “guessed” another country) whether they felt there was “solid evidence” that Obama was born in another country, or whether it was their “suspicion only.” This group split about evenly on those two options.

The net result: The ABC/WP poll found that just 11% of Republicans believed there was “solid evidence” that Obama was born in another country. Among all Americans, it’s 9%; among Democrats, 6%.

So, what do we make of these differences in percentages?

Even with the most objective question (asked by ABC/WP), there is a partisan divide – Republicans more skeptical than Democrats about Obama’s actual birthplace. That difference could very well reflect the fact that compared with Democrats, Republicans are much more likely to watch the conservative TV and radio talk shows, where Obama’s nationality has been widely questioned.

But the much larger partisan divide reported by the CBS/NYT poll – along with the much larger percentage of Republicans who are supposedly skeptical about Obama’s birthplace – is caused by question wording. That wording stimulates an exaggerated skepticism among Americans overall, but especially among Republicans. Yet, it’s those exaggerated numbers that raised alarm bells about the spread of the “birther” movement.

Had all polling organizations made a more responsible effort to measure what the public is really saying, along the lines of the ABC/WP poll, the polls would have shown a more realistic picture of how many people actually believe Obama was not born in the U.S.

Instead, we have statements like this one from Salon.com: “An alarming poll from CBS News and the New York Times last week found that nearly 70 percent of Republicans either believed President Obama wasn’t born on American soil or weren’t sure.”

That would be alarming…if it were true.