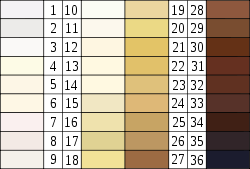 WAS THE RAPIST'S SKIN TONE A NUMBER 18 OR 34? The AP Style Book states it is okay to identify a person by race when it is pertinent to a story. However, race and skin color do not necessarily correlate. So what's a media outlet to do? Shown above is Felix von Luschan's chromatic scale chart used in the early 20th century to measure differences in skin tones. Since the chart depended on subjective human judgments and perceptions, it was soon abandoned. (Image from Wiki Commons)

News of a New Orleans college student abducted and raped at knife-point is jarring enough. But did the gaping hole in the Times-Picayune report’s description of the suspect –for reasons of “political correctness” — leave local citizens at risk?

A Tulane University Campus Crime Alert sent to students by the University’s police department on the day of the attack was straightforward. It gave the suspect description of a “ Black male, approximately 5’10” tall, mid 30’s in age, dark complexion, short white hair, unshaven, wearing a black hooded sweatshirt with a front zipper, black pants, armed with a black handled switchblade  knife.” Fair enough.

However, in contrast, The Times-Picayune’s write-up on the crime said (emphasis mine), “The suspect is described as being in his mid-30s and about 5 feet-10 inches tall with a dark complexion, short white hair and was unshaven. He wore a black-hooded sweatshirt with a front zipper and black pants, and was armed with a black handled switchblade knife.”

While these descriptions are nearly identical, The Times-Picayune blurred the original police report’s identifying feature –color of skin tone. The vague description — “a dark complexion” –fits a large number of citizens in New Orleans with Sicilian, Hispanic, Vietnamese, black and mixed ancestry. An olive-skinned person with an Italian background could be just as easily described as having a dark complexion as a dark-skinned African American or Island person.

The Times-Picayune went through the trouble of describing the color of the criminal’s weapon found in the student crime alert–but not his skin.

Please note that The Associated Press (AP) Stylebook permits identifying a person by race when it is “pertinent” to a story. It states, according to newsroom guidelines posted online, “the term ‘black’ is acceptable for a person of the black race.” In the instance of identifying a violent offender at large in the public, race is unquestionably pertinent. Did the Times-Picayune put its readership at risk presumably because they were afraid of a single word that ethical guidelines state is acceptable to use?

New Orleans citizens need a local newspaper dedicated to harnessing the power of words, not acting in fear of them.

iMediaEthics contacted The Times-Picayune by email and is waiting for comment.