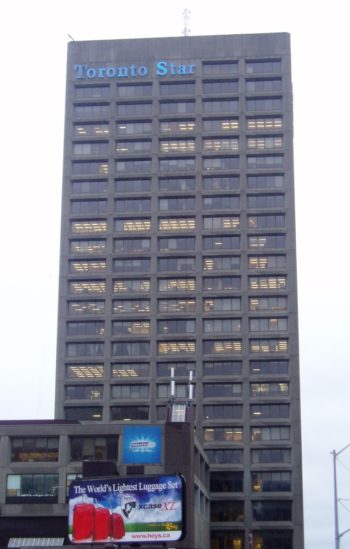 The Toronto Star apologized to a local mosque after including a photo of it with a news report, “Islamic schools, mosques in Canada are filled with extremist literature: study.”

“We are very much impressed and pleased with the Toronto Star apology,” the mosque’s spokesperson Safwan Choudhry told iMediaEthics by e-mail.

The story by the Toronto-based national news wire Canadian Press reported on a study by Thomas Quiggin and Saied Shoaaib that claimed that Canadian Islamic schools and mosques offer a significant amount of extremist writing. “While the photo was removed within a few hours of being posted online, this was a bad mistake on the Star’s part and we have spent considerable time here this week determining what went wrong,” Toronto Star public editor Kathy English wrote.

With the report, the Toronto Star published a photo of the Baitul Islam Mosque in Vaughan, English reported. “The Baitul Islam Mosque has no connection whatsoever to the content of the study — which has itself come under question — so the image of this specific mosque should never have been linked to this article,” English reported. “As I later learned, no Toronto-area mosque whatsoever was part of this study.” In fact, she reported that the study was based on “four mosques and three Islamic schools in the Ottawa area.”

“Given the bigotry and Islamophobia we witness, there are very real fears about our mosque being linked to a hurtful and harmful story,” Choudhry told English. iMediaEthics has written to the mosque for further comment.

Apology from @TorontoStar for displayed a picture of #BaitulIslam w/ story re: Extremists Literature at Mosques https://t.co/1OR8wqZCva

The Canadian Press’s editor Stephen Meurice defended the story to English, while also admitting that it probably needed more detail, and noted “the study did not claim to be definitive.”

“In hindsight, rather than send a shorter and less complete version of the story to wire, we should have waited until we were able to craft a single story with more context, background and the entire range of available opinion, rather than do two separate stories on successive days — particularly given the potentially sensitive nature of the subject matter, one that often elicits strong opinions and emotions on all sides,” he added.