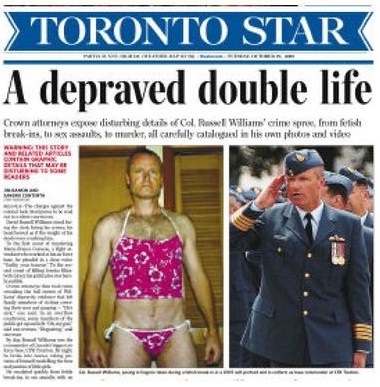 Toronto Star public editor asked readers if they would have published the two photos above as the Star did Oct. 19 on its front page. (Credit: Toronto Star)

The Toronto Star’s public editor Kathy English posed a series of editorial decisions to the Star’s readers last week.  English asked readers to select either yes or no to the real-life decisions.

For example, English asked readers if they thought it was appropriate to publish a photo of a convicted serial killer in women’s underwear on the front page of the newspaper.

Respondents were divided on whether to publish a graphic photo of “convicted ‘sadosexual serial killer'” Russell Williams wearing women’s lingerie juxtaposed with an image of the man “in full military uniform.”  Readers for publication argued that the graphic photo visualized Williams’ “dual identity;” readers against publication found it excessive and “upsetting.”

English’s verdict?  “This was a tough call but I think the newsroom did the courageous thing here.”  Note: English wrote a column   in October defending the Star’s publication of the photos of Williams in women’s lingerie and a girl’s bathing suit.  (See here.)  In her column, English commented that the newsroom was “divided” on publication as well.

She wrote at the time: “On a purely emotional level, I’m not convinced I ever needed to see” the photos of Williams.  But, “I saw clearly that nothing conveyed the stark truth of the savage sickness of the serial killer who has dominated Canadian news this week so powerfully as the juxtaposition of the two images published on Tuesday’s front page.”

Noting that “No credible news organization such as the Toronto Star can always please all of its many readers,” English wrote that she wanted to show readers some of what goes into the newspaper.

English commented that as the only public editor for a newspaper in Canada, she receives many “concerns and complaints” daily. “Of course, it is always easy to be a critic after the fact,” English wrote.

So, for the second year, she asked readers to respond to a series of “real-life situations” with what decision they would make.  Her 12-decision examples included publishing graphic photos or textual details of a beating or death, sensational headlines, or publishing ” the n-word” and so on.

After readers responded, English wrote a follow-up column publishing readers’ responses (see here).  Readers were given the option to say if they agreed or disagreed. She published the percentages of readers’ answers, some comments from readers and her response to the scenario.

She reported that “almost 1,700 readers from across Canada and abroad” answered her questions.

On the topic of publishing graphic details of a death, 55% of respondents voted against publication, and English said she agreed.  Likewise, 60% of respondents said not to publish a graphic beating photo on the front page of the newspaper.

English also agreed with 60% of respondents who answered they wouldn’t publish “the n-word,” noting that stance is “in line with [the Star’s] longtime policy on obscenity.”

When asked whether to publish a video of two high school students fighting (and to name the students), 80 percent of respondents and English said no. English commented:  “In an age when what is printed lives online forever, I don’t think there was enough news value here to justify identifying these youths.”

iMediaEthics asked our poll columnist David Moore about the forced choice format of the Star’s survey.  In the past, Moore and George Bishop have been critical of the limitations of forced choice questions.  However, in this instance, Moore found the the format “works pretty well.”

“The respondent is supposed to be the editor, and an editor has to make a decision — yes or no.”  However, he did find some questions were a little unclear.  For example, the second situation in which readers are asked if they would publish the headline “Buddha-like child quits smoking” above a story and image of Indonesian toddler Ardi Rizal.  Moore noted that he wasn’t sure about which issue the question asked.  Moore wrote:

“But my questions about the meaning of the questions are not criticisms of the yes/no response option.  I think yes/no works in this particular case, even if a few of the questions could be a bit clearer as to what the options are.”