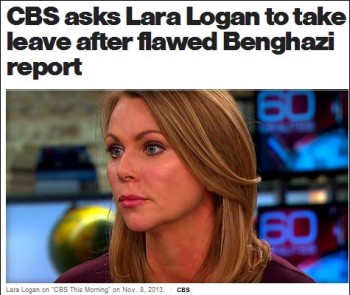 Lara Logan, the former 60 Minutes correspondent, is suing New York magazine for $25 million over a five-year-old article about her now-retracted 2013 CBS News report.

The 2014 New York magazine article, “Benghazi and the Bombshell,” reported on the “trajectory of her career” after her “deeply flawed 60 Minutes report on the attack in Benghazi, Libya.” A New York magazine spokesperson, Lauren Starke, told iMediaEthics by e-mail, “The New York Magazine article was thoroughly vetted and fact-checked, and we stand by our reporting.”

The New York magazine article reported that Logan would return to CBS at some point in 2014 after that leave of absence but “as the months have rolled on, Logan’s return appears less and less certain.” The article quoted anonymous sources critical of Logan, commented she had “an almost insatiable stomach for risk,” claimed:

“Logan had a zealousness that could cross the line into recklessness, a confidence that could come off as arrogance. A common view among current and former colleagues (keeping in mind that not-for-attribution backbiting and Schadenfreude are a stock-in-trade of TV news) is that Logan’s star power blinded her superiors to her flaws.”

In 2013, CBS News put Logan and her producer Max McClellan on a leave of absence after Logan’s October report on Dylan Davies, who falsely claimed to CBS News he saw the Benghazi attack, as iMediaEthics reported at the time. Logan issued an on-air correction stating CBS News was “misled” and apologized on CBS This Morning. 60 Minutes also acknowledged that it didn’t disclose Davies had a new book being published by a CBS subsidiary.

Logan’s lawsuit, filed Dec. 13 in the U.S. District Court for the Western District of Texas, argues the article “made light of the egregious rape and horrific sexual assaults Logan endured in Egypt in February 2011, (b) that viciously disparaged Logan and severely impugned her skills as an investigative journalist, and (C) that caused Logan to be ostracized by colleagues and friends, by her employer, CBS News, Inc., and by its parent, CBS Corporation, resulting in her vilification in the press and on social media.” The lawsuit claims that the article “recklessly minimalized [sic] what happened in Tahrir Square,” which she charges is “an affront to Logan and all survivors of rape and sexual assault.”

The lawsuit claims that the article’s writer Joe Hagan had a “pro-Clinton bias” based on what the lawsuit calls “a glowing, apologetic article by Hagan about Hillary Clinton” that then “corrupted his views about Logan.” The lawsuit notes Logan asked for a “correction, clarification or retraction” Sept. 23, 2019, five years after publication, but that it is “timely and sufficient.” iMediaEthics has asked if Logan sought a correction or retraction before then and why she is only suing now.

Logan’s lawsuit claims she and “her 60 Minutes team” were never told that Davies’ book was going to be published by CBS’s subsidiary, and that they “thoroughly researched Davies’ story,” that Davies wasn’t “a key witness” in the report, and that CBS “carefully vetted the story.” The lawsuit claims the retraction of Logan’s report was “driven by politics” because it “contradicted the Obama narrative that al Qaeda was on the run,” and that she was ordered to “own” the mistake and say Davies “lied.”

That said, she stands by the report’s “central thesis” and “except for part of Davies’ account,” the rest of the story was “absolutely accurate and ahead of the pack,” the lawsuit says. Further, the lawsuit says that during the internal review, she was told they didn’t vet certain things enough, but that couldn’t have been done because Logan and her team signed a non-disclosure agreement with the publisher about the claims in Davies’ book.

The lawsuit called the New York magazine headline identifying her as a bombshell “sexist, insulting and defamatory,” and argues then-CBS CEO Les Moonves was “embarrassed” by the article and “took it as a personal insult and affront.” (Moonves was fired in 2018 after allegations of sexual misconduct.)

The lawsuit claims that Moonves and Jeff Fager already had planned her return to the show before the article was published but it was “entirely and completely derailed” because Moonves “had an extremely fragile ego.” (Fager was also fired in 2018 for sending an “inappropriate” text message to a journalist telling her to “be careful” and suggesting she could lose her job when she was reporting on allegations of misconduct against him.)

After the article, Logan returned to CBS in a smaller role and her lawsuit claims “everything was made more difficult,” such things as getting resources and more work, and that she lost a lot of money because her salary was cut from more than $2 million to $750,000 in 2015. She also argues her requests to cover stories were ignored or rejected.

iMediaEthics has written to Logan’s lawyer and CBS. New York magazine told iMediaEthics, “The New York Magazine article was thoroughly vetted and fact-checked, and we stand by our reporting.”