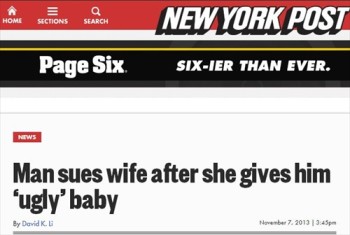 The New York Post reported recently that a Chinese man named Feng Jian’s lawsuit against his wife for giving birth to an ugly child. The story claimed that Feng said he was tricked by his wife because she had had a ton of plastic surgery before meeting him and didn’t tell him.

But, the story has been debunked as “probably false” by urban legend website Snopes, Jim Romenesko reported. Several other outlets that have reported on the claims have backtracked to acknowledge that the story is probably phony.  Snopes pointed to a 2004 story from the Heilongjiang Morning Post about  Feng’s lawsuit.

Further, Snopes noted that the image used to accompany the lawsuit report shows a couple with “three children, the eldest of which is a boy.” And, the picture has been used as a Taiwan plastic surgery ad.

The New York Post has since added a clarification to its report, acknowledging the story has been questioned but standing by it. It reads:

“Clarification: Reports of Feng’s lawsuit against his wife were originally reported in European and US newspapers in 2004, but with no details of any adjudication or payout. While many have cast doubt on the wild tale, details of an alleged civil settlement were reported on Chinese Web sites last year and English-language media this week.”

However, the New York Post was likely just making excuses, iMediaEthics found. We followed the trail to see where this story came from — see what we found below.

What is the sourcing for the  lawsuit’s claim?

The New York Post listed the source of its story as China’s Sina News.  iMediaEthics searched Sina‘s website for “Feng Jian” and had no results. Not promising.

But, the Post claimed that recently “details of an alleged civil settlement were reported.” So we checked out what English-language media have been reporting on Feng’s story to see if the Post’s excuse carried any weight.

What did we find?

This month, the International Business Times reported on Feng Jian’s lawsuit, but it acknowledged in its story that the story “may be a hoax.”

Last year, the Huffington Post reported on the lawsuit but later admitted the story was “probably a hoax.”  The Huffington Post story and a separate 2012 story by the Daily Mail both sourced their reports to Denver Fox-affiliate KDVR TV.

“EDITOR’S NOTE: This original story was sourced to MSN, who has since deleted their story. According to Snopes.com, this story has since been identified as a hoax.”

The ABC Action News story appears to be the only recent English-language news story on Feng’s alleged victorious lawsuit that hasn’t been retracted or clarified as possibly fake.

iMediaEthics searched TheIndyChannel.com’s website to find its original story. But, we ran into a dead end: there were no results for “Feng Jian.”  TheIndyChannel.com’s Director of New Media Glen Hale told iMediaEthics by e-mail that the article did appear on its website but was written by “Internet Broadcasting, a web content provider we were affiliated with until the end of 2012.”

UPDATE: 11/11/2013 9:59 AM EST: Updated above with responses from the Irish Times and TheIndyChannel.com