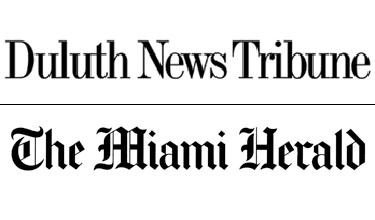 With so many newspapers trying to figure out how to get their readers to pay for web content, it was strange that the Duluth News Tribune refused a donation from a reader for the online paper a few weeks ago. Now they’ve changed their mind and cashed Chris Julin’s check for “$205”, according to David Brauer, MinnPost’s local media reporter.

To continue the trend, The Miami Herald is now also accepting donations. Starting Dec 15, according to NBCMiami, online Herald stories will include a link to “Support ongoing news coverage on Miamiherald.com.”

Appearing only at the end of posts and accepting only credit cards, the Miami Herald donation system seems limited and kind of clunky. The Duluth News Tribune, meanwhile, is calling unsolicited checks “the beginning of a conversation” about non-print subscribing,” in their interview with Brauer.

It will be interesting to see if any other newspapers start to implement a contribution system. Though it doesn’t seem likely that donations, small or large, are the answer to sustaining a for-profit news industry, It does seem that to preserve the quality of news and avoid further reduction in news gathering staff, fact-checkers, etc, papers are in some ways ethically obligated to accept and seek out any money they can get at this point that doesn’t compromise their independence or fairness.

Ethically, it would be interesting if readers could earmark their donations to fund better fact-checking or investigative reporting. But at the same time, directed donations could reduce the independence of papers, if say, readers donated overwhelmingly to support certain kinds of coverage and not others. The same question has been raised about crowd-funding news by organizations like Spot.Us, as well as new non-profit groups like the Texas Tribune.

Unfortunately, the flip side–closer relationships with advertisers that can lead to issues like the Washington Post salon scandal or recent problems at the Detroit Free Press–also has pitfalls. One could argue that it’s better that newspapers risk being at the whim of their readers than under the thumb of their advertisers.

Regardless, reader donations are unlikely ever to become a proportion of for-profit news revenue large enough to make these questions relevant.  In the meantime, it remains funny that the Duluth News Tribune had trouble deciding whether to cash a donation check, and also interesting that The Miami Herald doesn’t accept Discover Card.