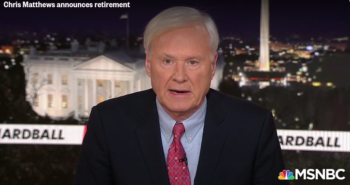 Chris Matthews announced his retirement today effective immediately, a week after he apologized on air to Sen. Bernie Sanders for comparing the senator’s Nevada Democratic Party caucus win to the fall of France to the Nazis.

In addition to his Sanders apology, Matthews was in the news for his Feb. 28 misidentification (and then acknowledgement of his “big mistake, mistaken identity”) of Sen. Tim Scott as Senate candidate Jaime Harrison, and a Feb. 28 GQ article alleging he made inappropriate comments.

In his retirement announcement, Matthews apologized for his previous comments about women’s appearances.

He said his retirement isn’t for “lack of interest in politics” but “after a conversation with MSNBC,” he decided to step down because “the younger generation is out there ready to take the reins.” Video is on NBC’s website.

He added that the younger generation is “improving the workplace…better standards…a lot of it has to do with how we talk to each other. Compliments on a woman’s appearance that some men, including me, might have once incorrectly thought were O.K. were never O.K. not then and certainly not today and for making such comments in the past I’m sorry.”