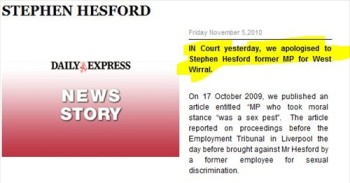 The Daily Express apologized Nov. 5 to a former politician for an Oct. 2009 article which incorrectly labeled him a “sex pest.”

The UK newspaper explained that it was apologizing and paying damages and legal costs to the politician, Stephen Hesford, over the story.  The apology reads:

“We accepted that there has been no suggestion of any sexual misbehaviour by Mr Hesford and that the proceedings against him were in his capacity as employer,” according to the apology.

As Bucks Herald explained, the sexual harassment claims were against Hesford “as employer rather than for anything that he had done personally.”