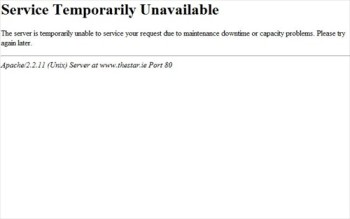 iMediaEthics has tried to access the Irish Daily Star's website the 15 and 16th of September, but we only receive the above message. (Credit: thestar.ie, screenshot)

Newspaper owner Richard Desmond said he is “taking immediate steps to close down the joint venture” his company Northern and Shell shares with Independent News & Media in publishing the Irish Daily Star after the Daily Star published topless photos of Kate Middleton, the UK Telegraph reported. Desmond is quoted as saying that he is “very angry” about the photo publication, which “has no justification.”

As we wrote yesterday, the Irish Daily Star ran the photos of Kate Middleton that were first published by French magazine Closer.  Closer defended the photos and claimed that Middleton and Prince William were “visible from the street” while sunbathing “on the terrace of a mansion.”  Closer‘s UK edition slammed the photos as “intrusive and offensive” and the couple filed a lawsuit against the magazine for “grotesque and unjustifiable invasion of privacy.”

Independent News & Media’s spokesperson Pat Walsh added that running the photos was “regrettable and in poor taste” and distanced the company from the Daily Star’s decision by saying the company “had no prior knowledge of the matter.”  Further, the company’s chief executive Joe Webb said, according to the Belfast Telegraph, that in light of Desmond’s calls, “we will be launching an internal inquiry to ensure there will never be a repeat of this breach of decency. However, we will be doing everything in our power to safeguard the 70 jobs at the Irish Daily Star.”

RTE reported that the newspaper’s editor Michael O’Kane said “I did this as a service to our readers, I’m a little taken aback by the reaction in the UK.”  O’Kane also compared the photos to “other celeb pics we would get in, for example Rihanna or Lady Gaga.”

According to RTE, the National Union of Journalists’ general secretary Michelle Stanistreet called Desmond’s plan to cut off the newspaper “an over the top reaction which should be reconsidered calmly and with consideration for the full implications for Irish journalism and for editorial diversity.”

“We’re absolutely horrified here in the office, and as a company. This has no merit as an editorial decision, it has no merit morally, it’s frankly a horrible decision.”

The UK Telegraph reported that “a St. James’s Palace spokesman” said that  “We will not be commenting on potential legal action concerning the alleged intended publication of the photos in Italy save to say that all proportionate responses will be kept under review.”

We’ve written to Independent News & Media asking for more information and will update with any response.

Also, as we wrote yesterday, Italian magazine Chi said it’s going to be publishing the photos too.  The UK Telegraph reported that Chi‘s editor Alfonso Signorini defended the photos because it’s “a deserving topic because it shows in a completely natural way the daily life of a very famous, young and modern couple in love” and because “this is a scoop.” He added in his defense:

“This is the first time that the future queen of England has been seen topless. These photos are not scandalous, they are natural and they do nothing bad to damage her image, if anything they make her more likeable, more modern.  She is topless like so many women seen on beaches around the world. The photos were taken of her on a terrace out in the open. There is nothing sexually explicit or shocking about them. If she was having sex on the terrace I would not be publishing the photos.”

He noted that “two summers ago” he also “published topless photos of my own boss, Marina Berlusconi.”