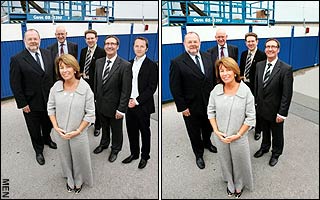 YOUR FAKERY IS NOT AS BAD AS MINE: When UK Culture Secretary James Purnell could not attend a photo shoot in 2007, he authorized the hospital to Photoshop an image of himself into the scene as if he were there. (See photo on left, where Purnell he is added on far right). The problem was he slammed the BBC two weeks earlier for faking phone-in contests. He pointed out that such fakery would compromise the public's trust. (Photo taken by Matt Priestley)

The UK Telegraph reported in Sept. 2007 that “Culture Secretary James Purnell, who led the Government’s attack on the BBC’s rigged phone-in competitions” allowed a fake photo to be made of himself that was released to the press.

The Telegraph said, “Mr Purnell turned up too late for a photo-shoot to promote a new development at a Tameside hospital, so he told the organisers to doctor the picture with fellow MPs to look like he had been there.”

The apparent irony is that publicly criticized the BBC two weeks earlier for “fixed phone-in competitions” and cited the erosion of public trust by such fakery. Indeed.

Jeremy Hunt, the shadow culture secretary, according to the Telegraph said, “James Purnell’s position as Culture Secretary looks completely untenable. How can broadcasters be expected to clean up their act if the secretary of state is telling people to doctor photographs?” He then called for a “public apology.” Purell’s people said he was unaware that the image would be distributed to the media.