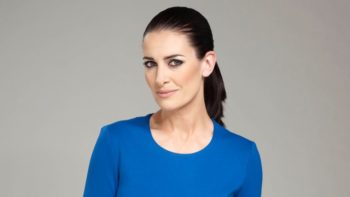 Was TV host Kirsty Gallacher drunk on the job? That’s what tweets suggested and the UK Sun went ahead and reported.

If the Sun had taken Gallacher’s word for it, they would have known she was not drunk, just ill. Her lawyers told the Sun so before publication.

Instead, the Sun added a tagline to the Sky Sports network host, “Thirsty” Kirsty. Not only is this libelous if untrue, it may be hard for Gallacher to shake for the rest of her career.

The newspaper reported questions and comments about Gallacher being drunk on the job, along with noting her social media post from the night before about having drinks with friends.

The Sun must believe Gallacher now, as judged by its apology following Gallacher filing a hefty £100,000 lawsuit against the UK tabloid, published by News Group Newspapers, a subsidiary of Rupert Murdoch’s News Corp. The apology tries to minimize the newspaper’s admission by telling readers it “did not intend to suggest” she was drunk.

iMediaEthics has written to Gallacher’s lawyers and representatives for more information and to confirm whether the lawsuit is still going forward, despite the newspaper’s apology. The Sun‘s spokesperson Dylan Sharpe declined to comment on the apology. Sky Sports declined to comment.

Gallacher, a news host for the top pay TV sports network in the UK and Ireland, Sky Sports, as iMediaEthics previously reported, filed a lawsuit against the Sun last month. She claimed the paper’s story was libelous, an invasion of privacy and quoted from an off-the-record exchange with her lawyer about her hospital tests.

The Sun‘s March 21 apology, published in print and online, reads in full:

“Our 23 December 2016 article “Thirsty Kirsty TV Collapse” may have been understood to suggest that Kirsty Gallacher did not collapse at work due to viral exhaustion but because she was in fact inebriated.

“We did not intend to suggest this and are happy to confirm that it was not the cause.

“We apologise to Ms Gallacher for any distress and embarrassment caused.”