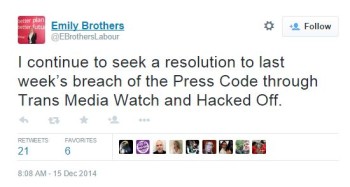 Emily Brothers tweeted this days after Rod Liddle's column about her. His column was ruled discriminatory. (Credit: Twitter)

The Sun‘s Dec. 11, 2014 column by Rob Liddle commented on Emily Brothers, a transgender woman who is blind.  It stated:

“Emily Brothers is hoping to become Labour’s first blind transgendered MP. She’ll be standing at the next election in the constituency of Sutton and Cheam. Thing is though: being blind, how did she know she was the wrong sex?”

The column “belittled Ms Brothers, her gender identity and her disability, mocking her for no other reason than these perceived ‘differences,'” IPSO chief executive Matt Tee said.

“Regardless of the columnist’s intentions, this was not a matter of taste but was discriminatory and unacceptable under the Code. Humour, even in bad taste, is acceptable but discrimination directed at an individual is not,” Tee added.

Further, it was “plain wrong” to say that Brothers wouldn’t have known about her gender. The “crude suggestion that Ms Brothers could only have become aware of her gender by seeing its physical manifestations was plainly wrong,” IPSO wrote.

IPSO noted that it was the first time IPSO reviewed a complaint “from a representative group” as opposed to a specific individual who complained, IPSO’s press release stated.

In a statement she sent to iMediaEthics, Brothers said she is “pleased” about the ruling but still “disappointed that The Sun did not constructively engage in seeking a resolution to what transpired.”

“Instead the Sun tried to undermine me in a personal way and attacked the work of Trans Media Watch,” she wrote. “In many ways that failure is more worrying than the original insult.” She further said that the IPSO ruling “falls short” and that IPSO is “toothless” because the Sun didn’t have to apologize.

“In the absence of an apology without bitterness on the part of Mr. Liddle and his rag of a paper, I can only conclude they do not regret their actions,” she wrote. “That isn’t encouraging for the future, as others may well experience similar treatment just because they are different.”

Brothers also thanked Trans Media Watch and everyone who supported her in response to the Liddle column. She noted that “I believe strongly in press freedom” and that she wants “more effective press regulation” so that the regulator could order an apology. “We want respect and to stop the mocking,” she stated.

The Sun even admitted its column was “tasteless,” IPSO reported, although the newspaper “denied that it was prejudicial or pejorative” or “negative or stereotypical.”

“Rather, it had been a clumsy attempt to seek humour regarding the existence of those conditions,” IPSO reported the Sun argued.

The Sun apologized to Brothers and allowed her to respond to the column in print.  The Sun writer Liddle apologized Jan. 15 writing:

“I made a poor joke in bad taste in this column a few weeks back. Well, ok, I suppose I do that every week. But this one was particularly lame…a poor joke by any standards even, even if it wasn’t meant maliciously. So I apologised to Ms Brothers and said that if I lived in Sutton, where she’s standing, I’d vote for her. And I apologise to her again now, in this column. I’d also like to add that having found out more about her I wouldn’t vote for her even if she was standing against Nick Clegg, George Galloway and [Firstname] Ole Ole Biscuit Barrell from the Silly Party.”

In addition to the apology, the Sun noted that it would require any references to transgender issues to be OKed by the newspaper’s managing editor. But that wasn’t enough for Trans Media Watch, who complained to IPSO on Brothers’ behalf, because the apology used Brothers’ former name which it said was “a deliberate attempt to humiliate” Brothers.

For her own part, Brothers wrote for the Guardian about Rod Liddle’s column and the support she has received.

“I wonder whether he knows he’s a man when he turns the light out,” she wrote about Liddle. She added that she was “overwhelmed” by the “very humbling” response by the public.

In an interview with The Independent, she called his comments a “cheap shot.”

IPSO agreed. “The Committee did not accept that the apology published was a genuine attempt to remedy the breach or a sincere expression of regret; the columnist had used it as an opportunity for a further attempt at humour at Ms Brothers’ expense,” IPSO wrote. “However, the Committee was not satisfied that it had sufficient evidence to conclude that the inclusion of Ms Brothers’ former first name, which was not uncommon, in the apology, was deliberate.”

The Sun printed the IPSO adjudication on its website.

Trans Media Watch’s director Helen Belcher said in a press release sent to iMediaEthics: “While sad that The Sun published and disappointed they then defended Rod Liddle’s comments, I’m relieved that IPSO has acknowledged the code breach and demanded remedy.”

Trans Media Watch went on to criticize the handling of the complaint by The Sun. Belcher said that “about half of the Sun‘s initial response to IPSO was attacking us and alleging ulterior motives.” Its chair Jennie Kermode added:

“IPSO required us to negotiate with The Sun for a minimum of 28 days first, but it soon became obvious that The Sun saw no reason to negotiate, initially claiming that the code it signed up to should not cover its columnists. We were also concerned by The Sun attempting to introduce third parties into the process, and then criticise us to those third parties. Talking about a complainant in this way is a clear attempt to intimidate them.”

iMediaEthics asked the Sun for comment about the ruling and the statements from Trans Media Watch and Brothers. The Sun simply pointed iMediaEthics to the IPSO adjudication.