The unpopularity of the proposed GOP health care bill 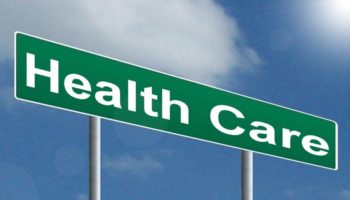 Several recent polls all agree that more Americans oppose than support the GOP health care plan, which is designed to replace the Affordable Care Act, known as Obamacare.

Still, the polls don’t all tell exactly the same story about the size of support and opposition. 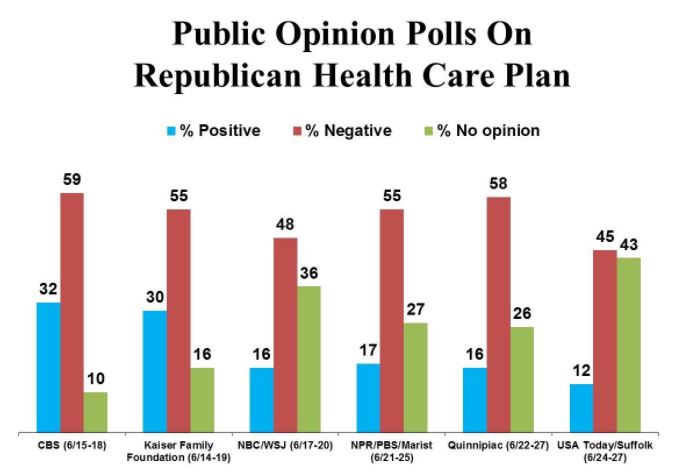 As the summary chart shows, support for the Republican health care plan varies from a low of 12% to a high of 32%; opposition varies from 45% to 59%; and the percentage of people without an opinion on the issue varies from 10% to 43%.

In all the polls, opposition is substantially greater than support, but the news stories tend to focus on the “support” category. And the last four polls all show very low support, ranging from 12% to 17%, while the first two polls in mid-June show comparable figures of 30% to 32%.

The low positive figures in the last four polls might give the impression that in the past couple of weeks, support for the Republican health care plan has tanked. But that inference is belied by the Quinnipiac polls, which show essentially no change from last March until now. 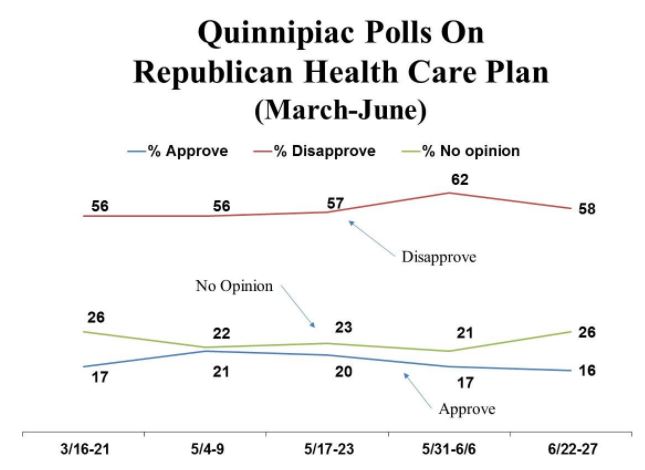 According to the Quinnipiac polls in March, May and June, public opinion has remained fairly stable. In fact, the first poll in March and the last poll in June show virtually identical figures.

The differences among the other polls are thus more likely to be caused by different question wording than by different timing. (All the media polls were conducted by phone, including both landlines and cell phones.)

Here is the question wording for each of the polls:

Two of the polls – NBC/WSJ and USA Today/Suffolk – offered the respondents an explicit “no opinion” option, while all the rest used the forced-choice format. The former definitely produced the highest “no opinion” responses (36% and 43%, respectively), and also two of the lowest support scores (16% and 12%, respectively).

One might expect there to be a significant percentage of the public without an opinion, given the complexity of the issue. The CBS poll showed, for example, that more than three quarters of its sample admitted they hadn’t heard enough of the GOP health care plans to have a “good understanding” of what they would do. Ironically, despite revealing widespread uncertainty about the plans, CBS showed the lowest percentage of people without an opinion – just 10% — probably because of the forced-choice question format.

There are other minor variations in question wording – one poll mentioning explicitly the Senate version, another explicitly mentioning the House version, while the others just referred to the Republican health care plans more generally. Some polls asked if people would “approve or disapprove”, others asked whether the plans are a “good idea or a bad idea”, or whether people “support or oppose” the plans, or if they felt “favorable or unfavorable” about them.

It’s possible that these variations had some effect on what the respondents told the interviewers, but I would guess any such effect would be small.

More important may be the sequence of questions that are asked. If we keep in mind that most people didn’t really know much about the health care plans, but nevertheless came up with on-the-spot opinions, we can understand that people’s responses could be significantly influenced by what questions were asked earlier in the survey.

Despite all the variations, the collective results of the polls give a fairly clear reaction of the public. By a margin of either 2-to-1, or 3-to-1, or 4-to-1, Americans have a more negative than positive view of the Republican health care plans.