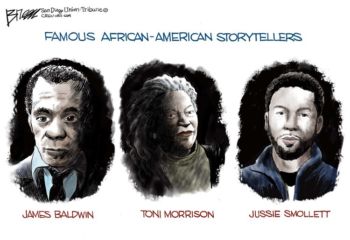 The San Diego Union-Tribune apologized for and unpublished a cartoon that showed James Baldwin, Toni Morrison and Jussie Smollett. Why? The cartoon offended readers and insensitively addressed “matters of race and social justice.”

Jeff Light, the publisher for the Union-Tribune, apologized in a note to readers and included a Q & A between the cartoonist Steve Breen and opinion director Matthew T. Hall. Light told iMediaEthics, “The cartoon should not have run. I found it offensive. I apologize for the poor judgment that allowed it to get into circulation.”

Breen said he wanted to portray Smollett “in an original way” by contrasting him with Baldwin and Morrison.

“All three figures in the cartoon have told stories of the African-American experience,” Breen is quoted as saying. “Creating art to make the world understand the black experience is a wonderfully positive thing. Telling a racially divisive lie is a horribly negative thing. So I was contrasting Smollett with Baldwin and Morrison, not comparing. The incongruous third item in a grouping is a common device in humor and I’ve used it many times in the past. It was not my intention to have anyone think less of these two powerful American voices.”

Breen added that in the future he plans to show any race-related cartoons to diverse friends for their perspective. Hall also apologized for having “OK’d the cartoon,” saying “I didn’t mean to offend anyone other than Smollett, and I see now how — and that — we did.”