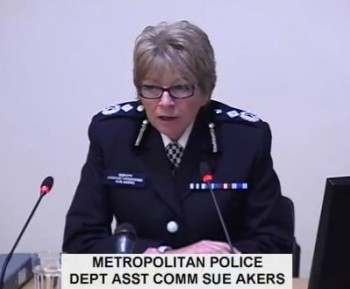 UK police official Sue Akers told the Leveson Inquiry into press standards that at the News Corp-owned the Sun “There appears to have been a culture of illegal payments and facilitating ways of hiding those payments.”  Bloomberg News reported. For examples, Akers cited the Sun’s payment of $127,000 to a source.

Akers is the UK police’s deputy assistant commissioner and is “in charge of probes into bribery and phone hacking.”

However, News Corp CEO Rupert Murdoch said those payments are “of the past and no longer exist at the Sun,” according to Bloomberg.

During her testimony (see here a transcript on the Leveson Inquiry website) Akers noted that “the whole objective is to identify criminality and it’s not to identify legitimate sources from journalists.”

We’ve written previously about questions and criticism of the News Corp. Management and Standards Commission’s turning information over to the police. The UK National Union of Journalists was concerned that some anonymous sources were being identified unnecessarily during the investigation into News Corp.

Also at the Leveson Inquiry, Leveson Inquiry lawyer Robert Jay said that a 2006 e-mail to Andy Coulson from former News of the World lawyer Tom Crone said that “Rebekah Brooks had been told that the police had evidence that News International paid an investigator, Glenn Mulcaire, more than $1.5 million for his hacking work over a period of years, and that he had hacked the phones of dozens of people.”  Coulson is the former communications director for UK prime minister David Cameron’s communications director and a former News of the World editor.

Brooks resigned as News International CEO in July. She edited the Sun from 2003 to 2009 and News of the World from 2000 to 2003.  She was arrested for questioning in the phone hacking scandal last July 17 and released on bail.

The New York Times noted that the e-mail counters News Corp’s claims “until 2010” that phone hacking was a rare violation made by former News of the World’s Clive Goodman, who was jailed in 2007 for phone hacking.

According to the Guardian and Bloomberg, during the Feb. 29 Leveson Inquiry, UK detective Philip Williams said that former News International CEO Rebekah Brooks “had her phone hacked by News of the World twice a week when she was editor of the Sun.”

Bloomberg noted that Brooks “took no action on being told that her phone was hacked.”

The Guardian explained that in 2006, police told Brooks that News of the World private investigator Glenn Mulcaire had her number in his notes. Mulcaire was jailed the next year for phone hacking.

In a separate Feb. 28 report, the Guardian reported that “documents released by the high court” indicate that “six journalists at the News of the World” used Mulcaire to hack phones.

According to a Feb. 28 Guardian report, the UK police “loaned Rebekah Brooks a police horse” in 2008.  While the police claimed “the horse had reached the end of its working life and there was nothing unusual in deciding to loan it,” the news of the loaned horse has added to suggestions that the police “has been too close to Rupert Murdoch’s News International,” Sky News and the Guardian reported.

Adding to that, the UK Telegraph noted that an anonymous source “close to the Prime Minister” said that UK prime minister David Cameron may have ridden the horse.   In a March 1 interview, Cameron confirmed that “it’s a matter of record that I have ridden horses with Rebekah Brooks’ husband in my constituency.” Cameron denies that he rode that horse in particular though.

Murdoch defended Brooks on Twitter, as Sky News noted.  Murdoch tweeted “Now they are complaining about R Brooks saving an old horse from the glue factory!” according to Sky News.

Brooks had the horse for two years and “paid for food and vet bills,” according to Sky News.