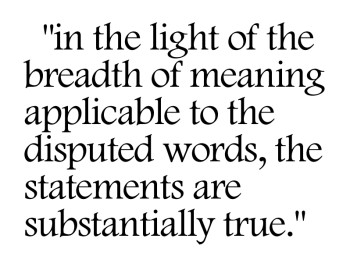 Mother Jones revealed last week that the magazine had won a libel lawsuit that has cost it millions of dollars to fight.

Frank VanderSloot, an Idaho billionaire who is a “major Republican donor,” Mother Jones reported, sued the non-profit news site for a 2012 article about him and his company related to donations to Mitt Romney’s presidential campaign, “Pyramid-Like Company Ponies up $1 Million for Mitt Romney.”

VanderSloot claimed Mother Jones‘ statements that he “took out full-age ads in his hometown newspaper, the Post-Register in Idaho Falls, publicly outing a reporter at the paper as gay” and that the ads “bashed” the reporter were defamatory, the ruling says. He also complained about a tweet from Mother Jones co-editor-in-chief calling him “gay-bashing.”

The judge, Darla Williamson, wrote: “The statements at issue in this lawsuit are statements of opinion which cite to their sources, giving the readers (or recipients, in the case of the February 6 Tweet,) ample opportunity to agree or disagree with them.” The judge added that “in the light of the breadth of meaning applicable to the disputed words, the statements are substantially true.”

Despite the summary judgment dismissing VanderSloot’s lawsuit, the judge criticized “Mother Jones‘ reporting styles, and indeed the general trend in political journalism, troubling.” The judge also accused Mother Jones of a “non-objective bias…resorting to sophomoric bullying and name-calling to lead the reader to adopt its particular agenda.” The judge continued to slam Mother Jones and the press.

VanderSloot said to the Idaho Post-Dispatch that the ruling is “so far better than we ever could have expected, I am blown away.” He is quoted as saying he wanted the case to go to a jury but “The judge gave us so much more than what a jury could have given us. We were only going to ask for $1 from the jury, so it wasn’t about money, it was to clear our name.”

He told the Associated Press: “The judge felt that Mother Jones‘ actions were so atrocious, she wrote three full pages chastising and exposing Mother Jones‘ reporters, methodologies and biases.” He also noted he is creating a fund for conservatives to sue the media.

Tom Clare, trial counsel for VanderSloot, told iMediaEthics “the case was always about trying to set the record straight about this reporting.”

“The case was never about money,” he said, arguing instead Vandersloot wanted it established that “these statements were not accurate.”

“It’s one of these weird situations where the court threw out the lawsuit, but our objective was accomplished,” Clare added.

Mother Jones issued a press release calling the ruling a “resounding victory” and quoting Mother Jones CEO Monika Bauerlein saying “Mother Jones‘ reporting and fact-checking practices are second to none.” She added that “this case was not about journalistic practices” but “misusing the courts.”

According to Mother Jones, after the article, which reported on VanderSloot’s anti-gay funding in Idaho, was published, his lawyers complained and the site posted some corrections for factual errors, and he later sued. The 2012 article carries an update and three corrections:

“UPDATE: The article reported previously published assertions that VanderSloot’s ad in the Post-Register outed reporter Peter Zuckerman. In a letter to Mother Jones, Melaleuca general counsel Ryan Nelson maintains that the ad did not out Zuckerman because Zuckerman had discussed his homosexuality publicly while in school in Florida. But Zuckerman’s boss at the paper, Dean Miller, has said that in Idaho Falls, Zuckerman “was not ‘out’ to anyone but family, a few colleagues at the paper (including me), and his close friends.”

“In the letter, Melaleuca maintained its disclosure of earning statistics is not “buried” on its website, and noted that VanderSloot has said, in a previous interview, that it is “tough for most salespeople to earn any money.” The firm claims its “public disclosures about the earning potential of its income opportunity are considered to be one of the most open and complete disclosures in the direct selling industry.”

“CORRECTION: The original version of this article contained errors, and it has been revised for accuracy. Mother Jones regrets these errors.

“*(1) The article incorrectly described the regulatory officials who made charges of false statements about supplements. It was the federal Food and Drug Administration that addressed this matter, issuing the firm a warning in 1997 for “false and misleading” labeling regarding the safety and effectiveness of several products.

“*(2) The article incorrectly described statements made by VanderSloot, Melaleuca’s CEO, in the Post Register ad. In the ad, VanderSloot repeated allegations—which he attributed to others—that reporter Peter Zuckerman’s sexual orientation had moved him to “attack the Boy Scouts and the LDS Church.” VanderSloot said it would be “wrong” to draw conclusions about Zuckerman’s motives.

“*(3) The article incorrectly described the involvement of regulators in raising questions about Melaleuca’s earnings claims. It was the Michigan attorney general’s office that raised these questions. And the story incorrectly reported the nature of a voluntary assurance agreement between Melaleuca and the Idaho attorney general. The agreement did not involve claims that Melaleuca made misleading earnings claims.”

Read the whole background and the ruling over at Mother Jones.