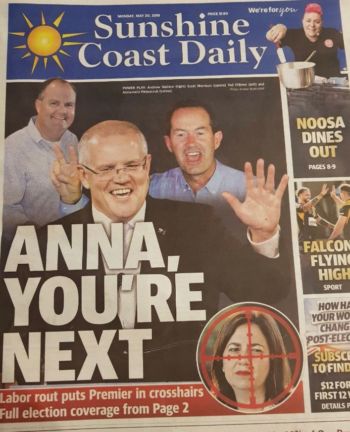 Palaszczuk is the premier of Queensland.

The image prompted the Queensland government to file a complaint with the Australian Press Council, and Palaszczuk’s representative to call for an apology, the Guardian reported.

A spokesperson for Palaszczuk told iMediaEthics by e-mail:

“The Premier is on the record about this matter. The image should not have been published in the first place. As the matter remains under consideration of the Australian Press Council, it would be inappropriate to comment further.”

Now, the Sunshine Coast Daily is apologizing to Palaszczuk. The print apology, published May 21, reads:

“This week we made a mistake. We let you down. We apologise to you and to the Premier,” the apology read in part. “We chose an image ot highlight an issue and it was wrong.”

“We acknowledge the message could have been conveyed in a different way,” the editor-in-chief Craig Warhurst wrote. “In no way does the Sunshine Coast Daily condone any sort of violence against women or politicians.