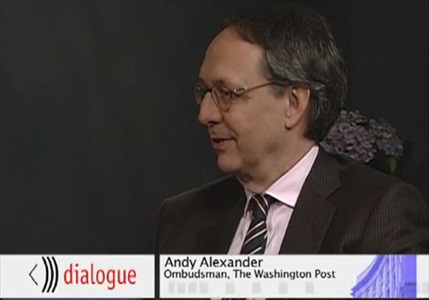 Andy Alexander’s last column as ombudsman questioned if the Washington Post can “regain its legacy of excellence.”

Alexander has served as ombudsman for the Post for the past two years.  He summarized readers criticism during his term as “A dominant theme has been that the Post’s journalistic quality has declined. It’s a view I share.”

Despite his belief that the newspaper “on its worst days is better than most newspapers on their best days,” Alexander criticized the Post for its smaller errors, “excessive use of anonymous sources,” slow news coverage, and a slow corrections process.

However, Alexander concluded that even though the Post is lacking in certain departments, it hasn’t “lost its journalistic compass.”

“During my tenure, I’ve repeatedly scolded The Post for journalistic shortcomings, some of them unfathomable. But I have never questioned its commitment to responsible journalism.”

“I’m forming my own consulting business to advise news media clients on issues involving quality control and ethics,” Alexander reportedly told Fishbowl DC.  “Separately, soon it will be announced that I’ll be affiliating with a major college of communications. I’ll do some teaching. But mainly, I’ll be involved in working on innovative and entrepreneurial journalism projects.”

Alexander further called his ombudsman term “challenging, endlessly fascinating and enormously fulfilling.”  He reiterated his criticism of the newspaper’s quality, but praised the Post for having an ombudsman.

“One of the things that continues to impress me about The Post is its willingness to invite scrutiny and its desire to get better. Very few news organizations employ ombudsmen. Even fewer guarantee them total independence by contract.”

In his two-year term, Alexander has criticized the Washington Post for many journalism ethics issues including: