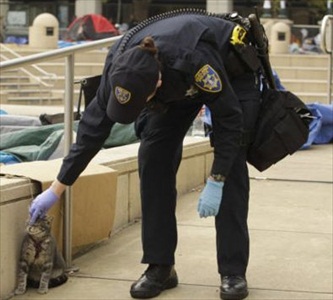 The Washington Post explained why it published this AP photo in its Occupy Oakland coverage. (Credit: AP)

The Washington Post defended its publication of a photo of a police officer petting a cat at the Occupy Wall Street protests in Oakland, California, Yahoo News reported.

As Yahoo News explained, much of the footage of the Oakland protests has been “dramatic, teargas-filled” and violent.  Washington Post photo editor Carol McKay told readers in an “Ask the Post” story why she published the kitten photo as opposed to a “dramatic’ image:  McKay said that the more violent images weren’t available as of deadline, and the kitten photo was an “interesting” and “visual” image available. What next? Puppy photos from the massive storm that has paralyzed New England this week?