Were Paparazzi photos of Irish RTE TV anchor taken from 'in the bushes?'

Were Paparazzi photos of Irish RTE TV anchor taken from ‘in the bushes’? 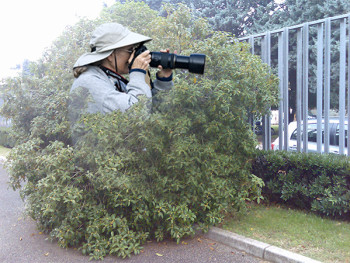 "I can guarantee that the freelance photographer who took those photos was not hiding in a bushes," said Paul Clarkson the editor of the Irish Sun. (Credit: Photo Illustration by London Shearer Allen. Bushes by Achillu via WikiCommons/Photographer by Kevin Cole via Flickr)

Irish Daily Mirror editor John Keirans admitted that it was a “mistake” to publish undercover photos of RTE news anchor Sharon ni Bheolain taken after it was revealed that she had been stalked.

The news of ni Bheolain’s having been stalked came out last week after a man was arrested and questioned by police related to the harassment, the Irish Mirror reported.

Following the arrest of the alleged stalker, a freelance photographer, whose name iMediaEthics has not seen reported, went to ni Bheolain’s neighborhood in Dublin and took photos of her without her knowledge.  The photos show ni Bheolain in a variety of states of daily activities and dress including wearing pajamas, walking her dog and carrying groceries. She didn’t know she was being photographed, RTE spokesperson Laura Fitzgerald confirmed to iMediaEthics.

The photos of ni Bheolain were published in three Irish newspapers – the Daily Star, Daily Mirror and Sun, according to Press Gazette.

The Daily Mirror, for example, captioned images of the anchor showing “the strain of the past few days,” referencing the arrest of her alleged stalker.

Responding to the publication of the photos, ni Bheolain said in a Feb 24 interview with RTE’s Joe Duffy that she was “probably more upset this morning seeing those photographs [in the media] than I have been at any stage over the last six weeks.”

ni Bheolain said the photos “disgusted” her because she had an expectation of privacy in her neighborhood. “Your house is your refuge,” she said, adding that she might contact the Irish Press Council over the photos.

She added that the photos were “clearly long lens stuff” and that she “didn’t notice anyone hanging around in bushes.”

“I wasn’t aware of anyone hiding or skulking on my street” when the photos were taken, she said.

iMediaEthics asked the Irish Press Ombudsman John Horgan if he has received any complaints over the publication of the photographs. He told iMediaEthics, “Because all complaints are confidential, we neither confirm nor deny the receipt of any complaint within the three-month period after an article has been published, unless the complaint concerned has been fully investigated and adjudicated (partly because of our confidentiality rules, partly because a complaint may be lodged at any time within that three-month window).”

iMediaEthics asked ni Bheolain’s employer, RTE, if it or she had any further comments about the photos. RTE’s Fitzgerald pointed us to ni Bheolain’s above interview and added:

“There is an ongoing police investigation relating to other harassment issues so neither she nor RTE is commenting any further on the matter as I’m sure you can understand.”

While Daily Mirror‘s Kierans admitted in an interview with Ireland’s Newstalk radio that the newspaper shouldn’t have published the pictures, for which he said the paper paid a “three-figure sum.”

“I feel certainly on our part that we did make a mistake,” Keirans said. “Rightly or wrongly, we thought they were harmless enough. We decided to use them on page 3. We deliberately didn’t use them on page one because I sort of felt she’d been through enough but in hindsight… we made a mistake and I’d like to apologize to Sharon for that.”

Clarkson said he was “genuinely surprised at her reaction,” according to the Irish Independent.

Clarkson claimed ni Bheolain’s comments about the photos “blew this issue even more out of proportion — that there were people hiding in bushes yesterday.”

“I can guarantee that the freelance photographer who took those photos was not hiding in bushes,” he asserted. “It was a public street and we were very careful to crop out any images of her daughter. Her daughter is not part of the story so we did show consideration.” he said.

iMediaEthics wonders on what basis he can guarantee that the lensman was not shooting from a hidden location. After all, ni Bheolain claims to have no knowledge of being photographed.

iMediaEthics has written to the Irish Star, Sun and Mirror for further comment. We’ll update with any response.

Were Paparazzi photos of Irish RTE TV anchor taken from ‘in the bushes’?