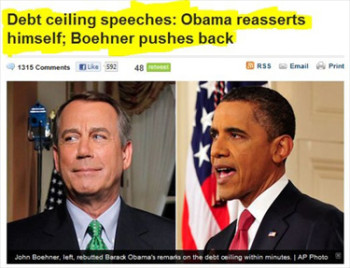 As the world waits to see what Congress and the President will do about the debt limit, pollsters have been furnishing us with almost daily updates as to how the public would deal with the issue. The results, however, are highly contradictory, making it difficult to discern exactly what Americans want.

But the answer is hiding in all the poll numbers. Put simply: The public wants Congress to reach an agreement with the President. Almost any agreement will do.

The exact nature of the agreement is beyond the collective judgment of the people, though pollsters have asked tons of questions about this or that aspect of a debt ceiling solution. And the polled have offered their views.

A review of recent polls on pollingreport.com shows that – depending on the questions and the way the questionnaire is designed – pollsters can show either a majority of Americans in favor, or a majority opposed, to raising the debt ceiling; either a majority favors a tax hike in the debt deal, or a majority is opposed; the public is wildly in favor of “cutting spending,” but majorities cannot agree to cuts in any substantial government program (majorities of Americans oppose cuts to Social Security, Medicare, Medicaid, and defense).

So, what kind of a debt ceiling agreement is the public looking for?

It’s also important to recognize that the public, collectively, is not paying much attention to the debt ceiling issue. Less than a quarter of the public is following the issue closely, and even fewer say they understand “very well” the consequences of not raising the debt ceiling.

That means it’s up to the political leaders to make the decision. People’s willingness to follow their leaders is illustrated in the CBS News poll question asked in mid-July:

This sentiment is consistent with a USA Today/Gallup poll taken at the same time:

Looking to the public for a solution is not a solution. The public is looking to its leaders.  And judging them accordingly.
Who are the leaders willing to compromise to avoid default? So far, the public’s judgment is clearly negative about leaders of both parties. However, in a head-to-head comparison, the public views President Obama more favorably than it views Republicans in Congress.

Should the stalemate continue, the public’s negative judgment of the Republicans is likely to intensify.

David W. Moore is a Senior Fellow with the Carsey Institute at the University of New Hampshire. He is a former Vice President of the Gallup Organization and was a senior editor with the Gallup Poll for thirteen years. He is author of  The Opinion Makers: An Insider Exposes the Truth Behind the Polls (Beacon, 2008; trade paperback edition, 2009). Publishers’ Weekly refers to it as a “succinct and damning critique…Keen and witty throughout