When is Gruesome too Gruesome? Is Cop Shooting Photo too Graphic?

When is Gruesome too Gruesome? Cop Shooting Photo too Graphic? 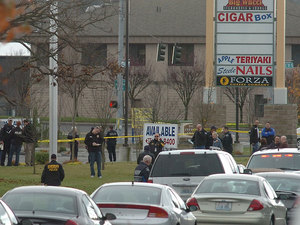 Police at the scene of the November 29 shooting spree that left four police officers dead in Washington State.

Photo editors are schooled in choosing proper images during tragic situations. The decisions are never made lightly; newsworthiness, effect and necessity are all weighed heavily. In the end, the editors have a duty to their readers to post the most telling photo, the one that depicts the event.

A reader of the News Tribune disagrees. In a letter to the Washington state newspaper, she says it ran an insensitive photo to accompany a November 30th article about the Lakewood, Wash., police officers who were fatally shot in a coffee shop.

Diana Hilsendeger of Tacoma writes, “As the wife of a 26-year law enforcement veteran, I can only imagine how I would feel to see the picture of a blue tarp shielding a body with what appears to be blood seeping toward the parking lot. Of all the many pictures that have been taken of this event, why would you choose one that would add to their families’ grief? Once seen, there is no way to get this picture out of your mind.”

Her dismay over the cop shooting photo is understandable, but she is missing several of the basic responsibilities of media: to inform the public, to help them understand what happened at the scene to and to grasp the severity of the event.

Journalism students everywhere are taught about photo selection, taught to weigh the consequences but to remember that, as journalists, they have a duty to the public, not just to victims’ families. Every ethics class includes a lecture on instances when newspapers have been sued over “insensitive” images.

In an article posted on the Indiana University’s School of Journalism Web site, FineLine editor Robin Hughes breaks down the question, “A photograph captures an event as no words can. But should the photo be used if it will cause pain to the already grieving family of the picture’s subject?”

Hughes’s article centers on a photo run in the Louisville Courier-Journal after a shooting spree at Standard Gravure in the 1980s. The photo showed a victim lying on his back at the bottom of the stairs. More than 500 readers complained, and the victim’s family filed a lawsuit.

The Courier-Journal prevailed in the lawsuit, which went all the way to the U.S. Supreme Court, but questions remain over the decision to print the image.

In the Hughes article, Courier-Journal editor David Hawpe defended the decision: “’We did think about the impact such a picture might have on the family and friends of the victim,’ Hawpe said. ‘And we also thought about the need to confront readers in our community with the full consequences of gun violence.’ This larger public purpose took precedence, Hawpe decided. ‘I talked with the [victim’s] family to explain why …His widow rejected my reasons…I deeply regretted any pain the photo caused them…The photo did what I wanted it to do by showing the reality of what assault weapons are capable of,’ Hawpe said. ‘A less graphic photograph would not have been as effective.’”

iMediaEthics has contacted the News Tribune for comment, and we are waiting for a response. The image Hilsendeger references does not appear in the photo gallery of the scene, posted on the News Tribune web site.

When is Gruesome too Gruesome? Cop Shooting Photo too Graphic?