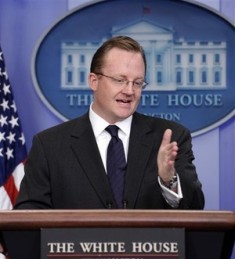 White House Press Secretary Robert Gibbs started using the social networking service Twitter on February 13, and has since posted a total of 179 tweets.

Gibbs’s tweets have already made news. The New York Daily News reported , for example, that after Vice President Joe Biden said the F-word at the health care reform bill signing, Gibbs went to Twitter March 23 to defend him with the post “And yes Mr. Vice President, you’re right.”

The Daily News said that this tweet “was much more than just damage control – it was an omen of the dramatic new direction the Obama White House has taken to manage the news in the 24/7 Internet-driven news cycle.”

On April 18, Gibbs told CNN “Reliable Sources” host and Washington Post journalist Howard Kurtz that he thinks Twitter is a great way to communicate with both the White House Press Corps and anyone else who wants to know the latest news.  He uses it to pass on links and photos sometimes.

Gibbs tweets breaking news, updates and pictures of the President, and the occasional personal post about going on a bike ride to his 55,000 followers.

In the “Reliable Sources” interview, Gibbs also said that during a press conference in mid-February he saw reporters tweeting away and became curious.

“It’s my job to know what is important to reporters and (Twitter) was to me a great medium to do that,” Gibbs said.

Gibbs also touched on media speculation about the Supreme Court nomination and said that the White House – not excluding himself – plays to the cameras.  “I think we all are,” Gibbs said.  “There are so many issues that we’re dealing with that are hard to boil down to 20 seconds” that will be shown on air.

Packaging the news in just 140 characters is difficult for anyone, let alone Gibbs, who represents the leader of the free world.  Kurtz commented that Gibbs is the “first White House press secretary to have to communicate in 140 characters.”

Gibbs also added that Fox News had a “political slant” in his view and revealed that the White House leaks news occasionally to get ahead of the 24-hour news cycle.  “On occasion we want to get ahead of what the news is going to be that day by letting folks know,” Gibbs said.

But, the Daily News noted that Gibbs’s Twittering isn’t totally embraced.  For example, when Obama decided in March to delay his trip to Indonesia and Australia, Gibbs tweeted the news, and some reporters complained they were left out in the dark, The New York Daily News reported.

In October 2009, iMediaEthics wrote about the White House setting up its blog.