Why are the Media Addicted to National Primary Polls? No GOP horserace among Santorum, Romney, Gingrich

Why is the Media Addicted to National Primary Polls? 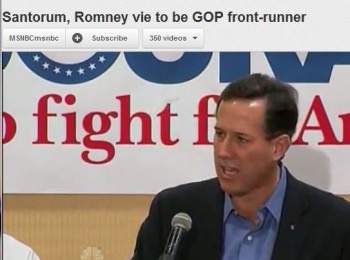 All over the news this week are the amazing results of a Gallup tracking poll, which shows Rick Santorum leading Mitt Romney among Republicans nationally by 10 points!

Even after winning Iowa (in a delayed count), Santorum remained well back of this fluctuating GOP horse race, barely catching up to the candidate everyone knows will not get the nomination, Ron Paul. (See here for a chart of the national polls.)

Then suddenly, after winning three relatively minor contests in Colorado, Minnesota and Missouri, Santorum surged ahead of Paul, quickly overtook Newt Gingrich and then flashed by the presumptive front-runner, Mitt Romney!

Reading those poll results is like being stoned, when everything seems so…great!…until sobriety sets in.

Given the media obsession with the national polls, it’s easy to forget there is no national primary, only statewide contests. Voters in each state don’t seem to be at all influenced by what the national polls say, but by factors peculiar to their state – not to mention the millions of dollars in attack ads aired on local TV stations.

Even Gallup, the Queen of the National Polls, admits that the national results reflect the candidates’ state victories, not the reverse. After Iowa, Gallup points out, Santorum and Romney (who essentially tied) both gained support among Republicans nationally. Romney surged to a commanding lead in this group after his New Hampshire victory, only to discover it wasn’t so outstanding, when Gingrich took the lead after winning in South Carolina.  But after millions of dollars in attack ads in Florida demolished Gingrich, Romney won the state and regained the national lead, and then watched as Santorum’s trifecta produced yet another lead.

But, really, do any of the candidates care about the national electorate? Do we? As history has shown, the national party followers, well, actually follow the lead of the state-by-state election results.

So, why pay attention to the national polls?

Why indeed! They give Gallup and other national pollsters a lot of media attention and business, but how does that help us understand the race?

Instead, let’s take a look at polls that could provide meaningful insights, those in the next two primary states (though it’s important to remember that many voters wait until almost election day to make up their minds).

The Arizona polls show Romney leading by about six percentage points, while the polls in Michigan show a virtual dead heat – with the trend favoring Romney (Santorum’s lead declined from 10 points earlier in the month).

What will happen among Republicans nationally if Romney should win both primaries, or lose both of them?

If that’s the question we’re asking ourselves, it’s time to sober up, folks! We need to keep our eye on the prize – the number of delegates each candidate has accumulated, not the standing in national polls.

Next on the agenda are the caucuses in Washington state, followed three days later by 11 state contests on Super Tuesday. That’s where we need to look…and leave the addictive national polls to the media.

Why is the Media Addicted to National Primary Polls?