Why Did NY Post Flip-Flop in its Michael Douglas Oral Sex-Cancer Stories? 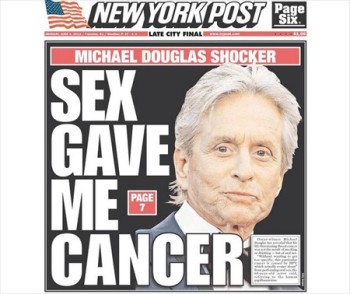 The headline on The New York Post’s June 3 front-page story shouted “Sex Gave Me Cancer,” and the tabloid reported as an unquestioned fact that actor Michael Douglas got throat cancer from oral sex. The Post seized upon the sensational sex-angle of the story without providing any real medical evidence  — that is, until the next day when The Post reversed tack and slammed Douglas for his medical claim.

“Michael Douglas has made a jaw-dropping revelation about his throat cancer: He didn’t contract it from smoking or drinking – but from oral sex.”

The subhead for the story read, “Truth behind his cancer,” despite the story’s failure to provide any medical research to support the actor’s claim that oral sex was the cause of his illness.

The Post’s report was based on Douglas’s comments to the Guardian claiming he got the cancer from oral sex. (Douglas’ rep soon tried to deny he said it, but the Guardian published the audio and transcript to prove it).

The Guardian interview with Douglas stated:

While The Post did print a short article with general information about human papillomavirus (HPV), the STD contracted during oral sex that Douglas stated caused his cancer, the scholarly research cited was not relevant to the actor’s medical condition.

The only scholarly research in the article associated with Douglas’ comment is a statistic that reads, “HPV-associated head, neck and throat cancer skyrocketed by 225 percent between 1988 and 2004.” But, the latter piece of data is irrelevant to Douglas because he was diagnosed with throat cancer in 2010 – six years after the conclusion of the research included in the article.

Tobacco and alcohol use are often recognized medically as a primary cause of the throat cancer Douglas contracted, and Douglas has said in previous interviews that smoking and drinking caused his cancer.

The next morning, June 4, The Post finally added some doubt with a column by Andrea Peyser critical of  Douglas and his claims–not of its own reporting.

In that front page story, The Post pulled a 180-degree turn and blasted the actor on the front page for blaming his cancer on sexual activity rather than on his past battles with smoking and drinking.

Ironically, Peyser’s June 4 column criticizes Douglas for stating as fact what The Post itself stated as fact the day before.  “Peyser to Michael Douglas: Shut your mouth!” the front page read, as if the newspaper had no memory of yesterday’s front page news story.

With disdain, the columnist writes: “He blamed his disease not on himself — his own failure to kick filthy habits, or pour out the bottle,” Peyser wrote in her column.

iMediaEthics is left wondering why The Post’s June 3 article chose not to doubt Douglas’ statements, while the June 4 article then attacked Douglas for making those very claims.  iMediaEthics has written to The Post to ask and will update with any response.

Another New York tabloid, The New York Daily News, got it right in its June 3 print coverage of Douglas’ interview with the Guardian by using distancing language and making it clear the oral sex leads to cancer claim was what Douglas “believes.” The Daily News’ lede: “Michael Douglas believes the cause of his throat cancer was not smoking or drinking, but oral sex.”

Instead of painting Douglas’ comments about his cancer as solid truth, The Post should have included research that would have challenged the actor’s claims – as The New York Daily News did in print.

The Daily News not only crafted Douglas’ claims as merely a “belief,” but it also cited the Oral Cancer Foundation as saying that there is no way to “unequivocally declare” that Douglas’ throat cancer was caused by HPV because of the actor’s “well-documented history of smoking and drinking.”

Chiderah Monde, wrote for the Daily News, “There is no scientific evidence that repeated exposure to HPV will reduce the risks associated with it” in response to Douglas’ misinformation told to the Guardian that more oral sex is “also the best cure” for oral cancer like his.

Updated: 5:40PM  A link to Guardian’s transcript and audio of their interview with Douglas at the heart of the controversy was added

Why Did NY Post Flip-Flop in its Michael Douglas Oral Sex-Cancer Stories?