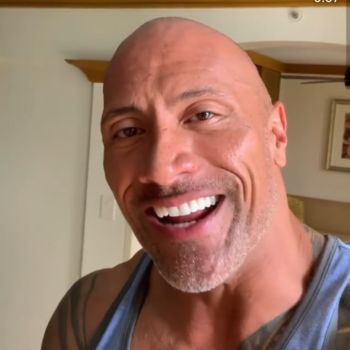 Dwayne “The Rock” Johnson accused the Daily Star of publishing a fake interview with him. The Star article claimed the “snowflake generation” is “looking for a reason to be offended.”

“I don’t have to agree with what somebody thinks, who they vote for, what they voted for, what they think, but I will back their right to say or believe it. That’s democracy. So many good people fought for freedom and equality – but this generation are looking for a reason to be offended. If you are not agreeing with them then they are offended – and that is not what so many great men and women fought for,” he was allegedly quoted as saying, according to the Huffington Post.

Johnson, the actor and former professional wrestler, posted on Instagram that “the interview never happened. Never said those words. 100% false.”

The interview was published as an exclusive front page story with the headline in print, “The Rock Smacks Down Snowflakes.”

The article’s link now goes to an error link. iMediaEthics has written to the Star to ask if it has any evidence to verify the interview or if it has any response to Johnson’s denial.