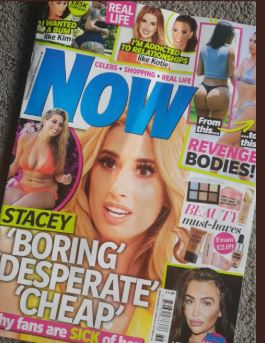 Solomon responded, calling it “the meanest thing I’ve ever seen.”

Now, Now has apologized, claiming the “boring, desperate and cheap” comments were from social media and not the magazine’s perspective. Now further denied it OKs bullying and wanted to “simply aim to inspire debate amongst our  readers.”

iMediaEthics wrote to Now asking if it has contacted Solomon directly about its cover and how many social media posts it based its headline on. A spokesperson for parent company TI Media only provided its statement and declined to comment further.

“The story featured in this week’s issue of Now magazine regarding Stacey Solomon was written on the basis of social media comments about Stacey and is not the opinion of Now magazine. As a publication, we simply aim to inspire debate amongst our readers about their favourite celebrities and TV stars, including Stacey. We do not encourage or condone bullying in any form. We apologise to Stacey for any distress our story may have caused.”

Now is regulated by the UK pres regulator the Independnent Press Standards Organisation. iMediaEthics has written to ask how many complaints, if any, it has received.

Why the silence @celebsnow u created an entire cover based on the opinions of maybe 3 people & now there are almost a thousand people holding Now accountable as to why u feel u need to constantly tear people down in a bullying manor & it’s as u haven’t seen ur 900+ notifications. https://t.co/kGGDLRPq0Q

Final thoughts… and for everyone on here, you are so inspirational and will be the reason people will begin to feel that they can be themselves. So thank you. pic.twitter.com/QIIWduJlpg