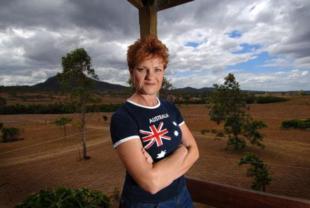 Pauline Hanson, an Australian politician, loses an election after fake nude photos, said to be taken in the 1970's by an old boyfriend, were published by The Sunday Telegraph.

The Sunday Telegraph apologized this week after editors were duped into printing nude photos that they falsely claimed were of Queensland politician Pauline Hanson. It was all a hoax, orchestrated by “con man” Jack Johnson.  The first clue that the photos were fake was that Johnson also claimed to have photos of another “well-known woman posing with the Sultan of Brunei,” reports 9News.

Issuing an apology after the damage has been done is little consolation for Hanson. She says she is already feeling the repercussions of this photo hoax. On Sunday she lost her bid for the seat of Beaudesert in the Queensland election and thinks the photos definitely tarnished her campaign. The photos were printed one week before voters were to go to the polls.

In an apology to Hanson, the paper said it didn’t hear about Johnson’s dubious history of false claims until after the photos were printed. I ask, shouldn’t the editors have thoroughly checked out Johnson’s credibility before trusting that he had nude photos of a politician?

An Australian blogger brought up the same point as he ripped apart the Telegraph for the “one of the weakest apologies in history.”

YoungandGrumpy writes: “They claim that Johnson has a ‘tenuous hold on reality’ and ‘declined to help verify crucial elements of his story.’ Ahh, right. So you published without verifying his story, which had holes from the beginning, and now its his fault? I’m sorry, but in my reading of this story, the ones with the tenuous hold on reality is the Sunday Telegraph…It strikes me as particularly odd that such an investigation takes place after the fact…All they did was to make a cursory examination to see if the pictures were altered, or photo shopped. They neglected to do any forensic examination to see if the pictures were actually of someone other than Hanson.”

He makes an excellent point. Photoshop is not the only way to create hoax photos. A purposeful misidentification in a caption can create the same net effect.

YoungandGrumpy continues, “That is not only sloppy, its downright disturbing. Hiding behind the old media claim that it is the public’s right to know, the Telegraph state that they ‘…published the pictures because we believed them to be a genuine news story.’ The truth is that it is far too simple for the media to malign a public figure based on the thinnest of evidence.”

YoungandGrumpy doesn’t support Hanson – he simply thinks this is outrageously lazy journalism on the part of the Sunday Telegraph.

The Telegraph has removed the story about the photos, and links to it now bring Internet users to a non-existent page. Meantime, this woman lost the election and suffers obvious damage.