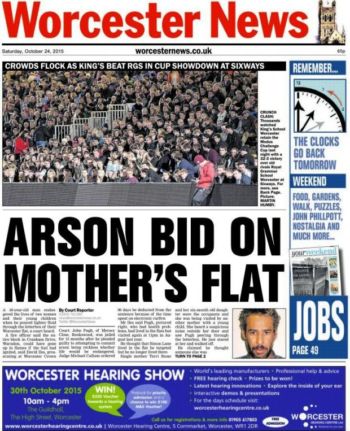 The Worcester News published a front-page photograph of two people using drugs in Worcester, a city about 35 miles south of Birmingham, England. Even though the faces of the pair were blurred, was it fair game to run the photo?

The photo, showing two people slumped over on the sidewalk in front of stores, accompanied an Aug. 14 story headlined, “Picture of desperation and squalor on streets of Worcester, as police say they are tackling city drug problems.” The story reported on drug use in Worcester, a recent incident in which a woman appeared to overdose on drugs on the street and the police reaction to the city’s drug problems. Worcestershire had a total population of about 569,000 in 2012, according to the UK government’s website, with Worcester City just shy of 100,000.

All of the informal complaints about the photograph the Worcester News received were via Facebook, the newspaper’s managing editor John Wilson told iMediaEthics by e-mail. He said this was typical because the newspaper sees a “range of reactions” on social media. Because the paper felt “our critics merited a platform for their views, and a response from us,” the Worcester News published an article citing the criticism and responding. The paper never heard from either person pictured, he noted.

“It appears that there is increasing pressure to restrict free speech in the UK,” Wilson added via e-mail to iMediaEthics. “The Crown Prosecution Service has just mooted a plan to treat online verbal abuse as a hate crime. Students, once champions of radical views, now routinely ‘no-platform’ speakers. Many MPs are still keen on Press reforms that would put the commercial viability of the industry at risk. And newspapers like ours, whose role in an open society is to scrutinise, expose and occasionally ridicule, are vilified on social media just for doing their job.”

Some readers thought it was an invasion of privacy, with numerous comments on Facebook about the post. One asked, “Do you have permission of these vulnerable members of our society to be photographing them? Ethically, I would question if these people were able to give true consent to be photographed anyway. I’m sure you’ve considered this morally though haven’t you…” Another commented that he had seen the two people pictured and “I hope they can get the help they need.”

iMediaEthics wrote to press regulator the Independent Press Standards Organisation. An IPSO spokesperson told iMediaEthics by e-mail it didn’t receive any complaints about the photo.

The paper defended the photo as newsworthy and in the public interest. “This was clearly a story of great public interest, and we reported it in a responsible and non-judgemental way,” Wilson wrote in an article on the Worcester News‘ website. iMediaEthics has asked Wilson how many complaints the paper received over the photo and if it has heard from either of the two people pictured.

A reader sent the photo to the Worcester News and the paper opted to blur the faces of the two people in the photo to protect their identity, Wilson wrote. He argued that the photo helps “shine a line on important issues,” might prompt drug users to get help, and clean up the city so drugs aren’t being used in public.

The Worcester News also published a handful of reader responses to the photo, both in favor and against. Readers who thought the photo was fine to publish called for more people to help those in need; readers who were upset with the photo thought it further harmed those in need.