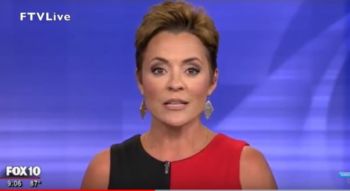 Kari Lake, an anchor for Phoenix, Arizona Fox-affiliate KSAZ tweeted that teachers were striking as part of “a push to legalize pot.” Now, Lake is apologizing for her factually incorrect tweet.

Lake’s tweet read, “What did I say?! #RedForEd is nothing more than a push to legalize pot. Check this out. T-shirts are already printed!! This is a big push to legaize pot and to make it more savory by tossing teachers a bone with a substantial raise. #IHateTheDishonesty.” With her tweet was a photo of a T-shirt of a marijuana leaf on Arizona state with #GREENforED.

iMediaEthics wrote to KSAZ to ask how many complaints the station received and why she apologized on air instead of on Twitter; Victoria Gurrieri, a spokesperson for Fox Television Stations, responded by pointing to Lake’s on-air statement. iMediaEthics sent Lake a direct message on Twitter.

“I’d like to take a moment to address a tweet I posted yesterday that upset a lot of people. It was addressing two big issues facing Arizona: teacher pay and the effort to legalize recreational marijuana. I made an incorrect conclusion in my tweet, and for that, I’m sorry. I respect teachers deeply and I’m concerned that some are trying to use the teachers’ fight for higher pay to move forward with their own separate agendas. As a parent and the daughter of a public school teacher, I have nothing but respect for teachers and the amazing work they do every day. And like most of you, I simply want to see lawmakers, teachers and administrators work this out and get back to that important mission of educating Arizona’s children.”