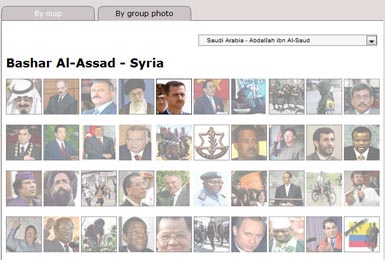 Reporters Without Borders issued its list of 40 freedom predators this World Press Freedom Day. (Detail above from the group's Web site)

Today is World Press Freedom Day and with it comes the new Reporters Without Borders’ annual list of 40 freedom predators, the BBC reported.

Reporters Without Borders is a French-registered non-profit organization that defends and supports journalists and fights press censorship.

The Society for Professional Journalists noted on their blog that the predators announcement list read somewhat “like an Academy Awards” presentation ceremony.

While the brother of the president of Sri Lanka, Defense Secretary Gotabhaya Rajapaksa, is listed as “condoning attacks on journalists,” the BBC reported that the Sri Lanka’s president pardoned a journalist today from a 20-year prison sentence.

Reporters Without  Borders noted that many of this year’s predators were on last year’s list as well. But, some previous predators have been removed from this year’s list, including Somalian intelligence chief Mohamed Warsama Darwish, Nigerian’s State Security Service and Islamist groups in Iraq.

The blog Firedoglake wanted to know why the United States Dept. of Justice wasn’t included on the list, noting the recent subpoena of New York Times reporter James Risen for his sources in a book critical of the Central Intelligence Agency.

In 2009, the United States “climbed 16 places in the rankings, from 36th to 20th” for its degree of press freedom, Reporters Without Borders noted.

The National’s Mixed Media blogged that this World Press Freedom Day “bears particular pertinence after the highest monthly death toll for journalists in five years.” The National is a Middle-Eastern English newspaper launched by the Abu Dhabi Media Company.

The Newspaper Publishers’ Association wrote that “it was the bloodiest April for the news media in five years.”  The NPA wrote that most of the killings this year have been in Honduras, Mexico, Pakistan, Colombia, and Nigeria.

The United Nation News Centre reported that “top United Nations officials have called for promoting the universal right to publicly-held information as well as ensuring the safety of all those who work in the media.”